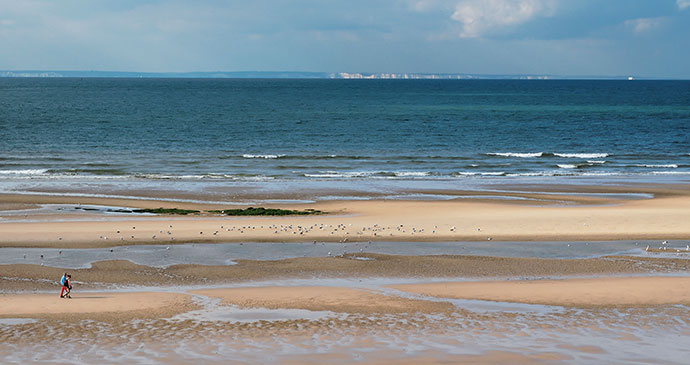 One of many beautiful views of the beach in Calais  © www.pas-de-calais.com

Calais is not just the gateway to Nord-Pas de Calais, but to France and Europe as a whole.

Calais is not just the gateway to Nord-Pas de Calais, but to France and Europe as a whole. As such, it is too often judged on its port alone – the commercial paraphernalia provoking scathing comments both from the motorists who teem through the ferry terminal for fast motorway links to the south, and from shoppers heading to out-of-town superstores and booze outlets. In their hurry to get out, these visitors virtually give two fingers to the 75m town hall belfry that forlornly beckons visitors to follow the ‘centre ville’ sign instead.

This is a pity, for while Calais’s gateway role remains paramount, its town centre has much to offer. It is historically English in character, making it accessible and attractive to cross-Channel visitors. Calais is also home to some of the finest restaurants along the coast, and, for shoppers, there is a range of specialist shops.

Getting your bearings is not always easy. Calais confusingly consists of two parts: the Old Town, home to the harbour area and the smartest restaurants, is virtually an island surrounded by canals; the southern part, meanwhile, is centred around the town hall with its landmark belfry – this is the place to shop. Neither part exactly exudes chocolate-box charm, for Calais is no beauty. But as an entrée to the surrounding coast it deserves attention.