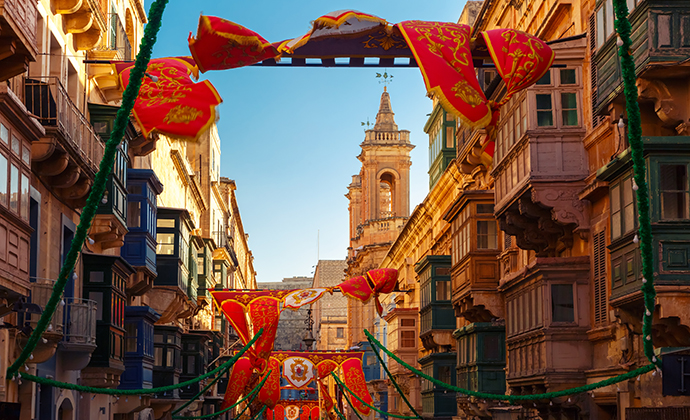 Valletta is certainly one of the easiest capitals in the world to explore on foot © kavalenkava, Shutterstock

Valletta is a maze of warm limestone buildings and narrow cobbled streets that offer glimpses of bright blue waters at many crossroads.

Valletta must be the easiest capital city in the world to explore and is probably the most charming. A UNESCO World Heritage Site and European Capital of Culture in 2018, it is just 1,000m by 600m and sits on a peninsula surrounded on three sides by the sea and on the fourth by the suburb of Floriana. On all sides it is enclosed by massive 16th- and 17th-century bastion walls.

Initiated by, and named after, Grand Master of the Order of St John, Jean Parisot de Valette, who led the Knights to victory in the Great Siege of 1565, the city was begun in 1566 with the clear intent that it should withstand any future attack by the Ottoman Turks. It was designed by military engineers, the first city since Roman times to be built from scratch on a grid system.

Valletta’s main entrance, City Gate, and the area just inside it have received a very 21st-century facelift. Nothing 16th century has been destroyed; a rather scruffy bit of 1960s reconstruction has made way for a controversial but thoughtful redesign by contemporary architect Renzo Piano (creator of the London Shard). Nonetheless, Valletta remains fundamentally the Knights’ city. The layout is little changed and many of their buildings – the auberges where the Knights lived and worked in their eight langues, the churches and fortifications, and the Grand Master’s Palace – are still standing.

The grid layout makes the city easy to navigate and offers glimpses of bright blue water at many crossroads. The warm limestone of the old buildings is set off by painted wooden gallariji (closed balconies) that overhang the narrow streets. Much of Valletta is pedestrianised and even some of the shabbier streets towards the edge of town have real charm.

Republic Street (Triq Ir-Repubblika) runs right down the middle from City Gate at the landward end to Fort St Elmo on the seaward tip. It passes along the brow of the rock (Mount Sceberras/Sciberras) on which the city is built, making it the easiest route to walk, free from the dipping and rising of the streets on the hill’s slopes. Republic Street is also the busiest and when a large cruise ship pours out 1,000 people you may want to escape to a parallel street (a mere 10m or so either side). The hordes rarely venture beyond the main drag.

At one time or another, it is worth taking all the main routes through Valletta (there aren’t very many) as well as the diminutive side streets, some of which are little more than a stone staircase. Circling the city just inside the fortifications (sometimes on their top) is also a pleasant and enlightening walk. Valletta is admittedly not the easiest place for wheelchairs or buggies (though it can be done). For anyone able and willing to walk (even a few hundred metres), though, it is a simple and hugely rewarding place to explore, packed with things to see and do.