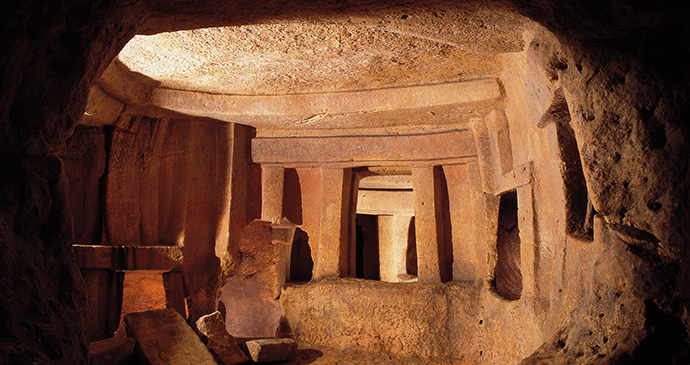 The hypogeum is an extraordinary prehistoric site © www.viewingmalta.com

The hypogeum offers a unique insight into the art and culture of the temple people.

An unobtrusive doorway in a suburban street is the unlikely entrance to this extraordinary prehistoric site – a complex underground burial chamber, a temple of the dead that echoes the architecture of the above-ground temples. Built on three levels – the upper being the oldest (used from around 3800BC), the lower the latest (until about 2350BC) – the hypogeum probably served the same community as the Tarxien temples – and perhaps also the nearby Kordin temples. Protected from weather and human interference, the hypogeum offers a unique insight into the art and culture of the temple people.

Discovered in 1899, the find was not reported until four years later when a workman digging a cistern broke through into the hypogeum again. The site was first examined by a Jesuit priest and historian of Maltese antiquity, Father Manwel Magri. Unfortunately, in 1907 he was called away to do missionary work in Tunisia, where he died, and the records of his excavation have never been found. Temi Zammit took over in 1910 and his report on the site is still a key document. It was he who estimated that the hypogeum once held some 7,000 bodies. This might seem a lot on an island whose entire prehistoric population was probably around that figure, but it is not excessive bearing in mind that the hypogeum was in use for over 1,000 years.