An island of stone amid an ocean of green countryside, the setting and sheer scale of this ancient castle make it an exhilarating place to visit.

This grand old castle’s commanding position on a rocky spur completely dominates the Sûre Valley in every direction. One look at its strategic location leaves one in no doubt as to why the local lord chose to build his defensive stronghold here. You’d have to be a fool, or have wings, to attack it. 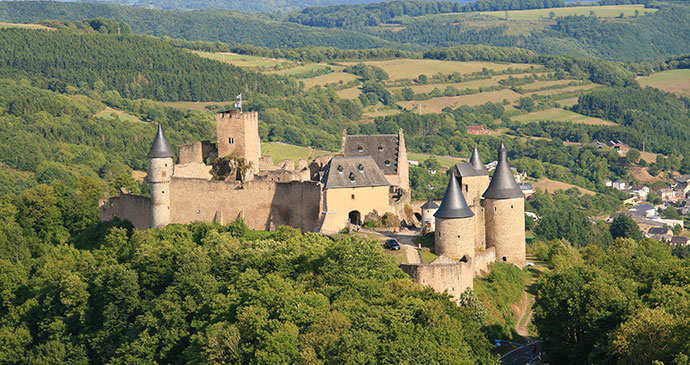 Ringed by a great stone wall with 11 watchtowers, Bourscheid dominates the Sûre Valley in every direction © LENS-68, Shutterstock

The first stone keep appeared around AD1000, replacing an older wooden construction, and archaeological digs have uncovered evidence that the Romans – no slouches in military terms – were here too. The major fortifications were built in the 14th century, but the glory days didn’t last long. By1512, the ruling Bourscheid dynasty had died out, leaving the castle divided into two. One half was never occupied; the other was abandoned in 1626. Despite centuries of neglect, the setting and sheer scale make this an exhilarating place to visit, arguably number two (after Vianden) in the unofficial national castle league. Ringed by a great stone wall with 11 watchtowers, the site covers an area of 150m by 50m. Clamber over the ruins and explore at your leisure, but don’t miss the quite wonderful views from the top of the tallest tower (No 14 on the plan you’ll be given with your entry ticket). The restored ‘Stolzembourg’ house is a multi-level mansion that hosts exhibitions, as well as models of the castle as it would have looked through the ages. For more detail than you could ever absorb, take the informative audio guide tour (included in the ticket price). One day each July (usually the second Sunday) the castle hosts its own medieval festival, on a similar theme, but smaller in scale to the one in Vianden.