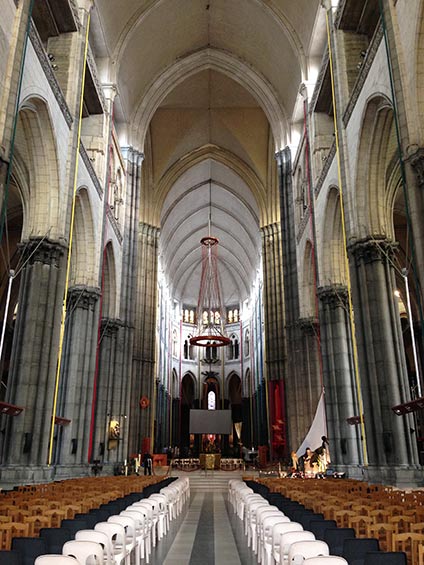 For most of the last century, Lille was a city with three-quarters of a cathedral. Notre Dame de la Treille had not only a fine Gothic chapel and apse, but also the largest expanse of corrugated iron in northern Europe. For, although the foundation stone had been laid in 1854 and the bulk of the edifice completed by the turn of the 19th century, work during the 20th century finally ground to a halt when the money ran out in 1947. What should have been the great front entrance was hastily boarded up. By 1999, in the golden age of accountancy, funding had finally been found and Lille was able to unveil its cathedral. From the outside, architect P L Carlier’s designs are very much of the age of the out-of-town shopping mall: B&Q perpendicular. But inside, it is quite a different story: imposing yet welcoming, a delicate blend of light and shade. The new rose window by Kijno produces a powerful effect within, and the remarkable doors created by sculptor and Holocaust survivor George Jeanclos, representing a barbed-wire vine of human suffering and dignity, are quite magnificent. The cathedral stands on the Îlot Comtesse, site of the former château of the counts of Flanders, and the surrounding streets follow the line of the old fortifications, with traces of a moat still visible. A Museum of Religious Art in the crypt opens on weekend afternoons from 14.30 to 19.00, housing 200 works of art and historic objects, including the original statue of Notre Dame de la Treille, dating from 1270. Regular free guided visits.