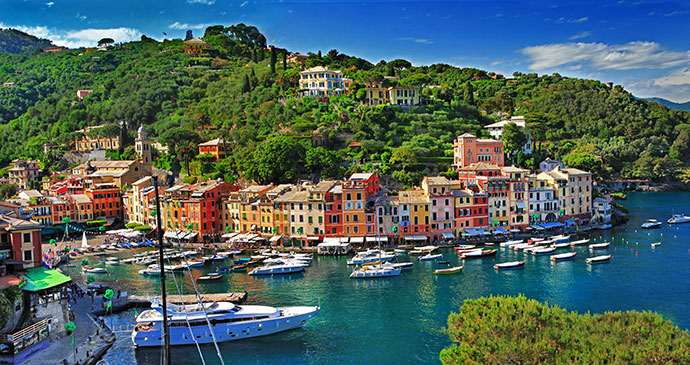 Portofino’s tall colourful houses curve around the bay in a cove that forms a perfect miniature harbour © leoks, Shutterstock

With its tall colourful houses which curve around the bay to form a perfect miniature harbour, Portofino is one of the most picturesque spots in Liguria.

Portofino’s tall colourful houses curve around the bay in a cove that forms a perfect miniature harbour protected from behind by steep green hills. When Frederic Lees arrived here in 1912, Portofino was famous for fish and lacemaking. He found it ‘as snug and as sunny a little port as ever a mariner could desire, and so picturesque that I know not where you would find a prettier’. The charm of the place was to watch the women sitting on cushions under the porticoes with their bobbins clicking away.

Late Victorian writers gushed about the beauty of the village, not without reason, and began a process that turned this sleepy little harbour into a celebrity Mecca. The woods behind are dotted with the villas of the rich and famous. That said, it is still one of the most picturesque spots in Liguria and best seen out of the main summer holiday season when streams of tourists descend on it during the day.