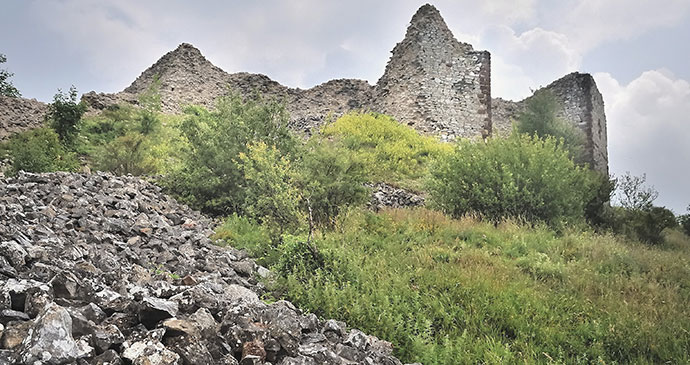 The heart of Kosovo’s booming medieval mining operation, the fortress at Novo Brdo has been newly renovated by UNESCO.

Since excavation began in 2014, it has become increasingly clear why the Novo Brdo fortress will eventually become Kosovo’s fourth UNESCO World Heritage Site. You can access the site by driving the winding path around the back, or park at the bottom of the hill for a heart-pounding walk up. There are two clear rings of walls indicating the upper and lower cities. At the time of writing, the lower city is still being excavated and rebuilt, but the upper city can be visited by contacting the rural tourism NGO for a tour with a local expert. Inside the walls of the upper city you can see several distinct structures, unearthed during excavations, including: a hammam; a church (used for storage by the Ottomans); two water reservoirs; an oven used for melting metal; and six defensive towers (one of which has stairs to the top for breathtaking views out over the countryside).

At the foot of the fortress is the 18th-century Osman Effendi Mosque, which is noteworthy for the fact that the incomplete stone minaret is separated from the main building. This is because the current mosque – rebuilt after being badly damaged during World War I – is smaller than the original and the existing minaret remained unfinished. Near the mosque can be found the remains of St Nicholas Church, thought to have been built as early as the 12th century. The church was converted to a mosque in 1466 and it is still possible to see the foundation of the minaret adjoining the church wall. It was renovated in the 1950s. Across the street is the Turkish türbe, or mausoleum, built during Ottoman rule.

On a hill opposite the fortress, it is also possible to see the foundation of the 14th century St Mary Church, built by the Saxons. It is across from what is believed to be a Turkish cemetery, where local scavengers have come for centuries in search of jars of gold thought to have been dropped or buried here during the height of the mines. There are believed to be more than 900 graves in the proximity of the fortress. A Jewish graveyard can be seen on the left as you approach the fortress from Mejdan.

While official tours of the mine complex do not yet exist, it is worthwhile to walk or drive through this eerily quiet part of town. You can see the remnants of the original elevators and cable car, passing the Polish mine (operational 1984–89) on your way back around towards Bostan. The Bostan church (known as the Church of Shndërrimi or the Church of the Transfiguration), which dates from 1868, also merits a visit. Turn down the road opposite the municipality building. The key is kept by the Roma caretaker at the house within the walls. There are some simple frescoes. A much older church, which is thought to date from the 6th century, is now only ruins higher up on the other side of the road to the municipality.