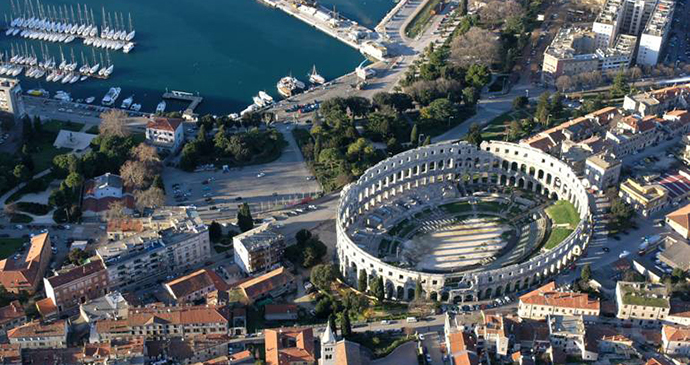 Pula is a thriving city, as becomes the largest urban area and economic centre of Istria, with some of the finest Roman ruins anywhere in Croatia.

Located towards the southern tip of the Istrian Peninsula, Pula often (quite undeservedly) receives less attention than neighbouring Rovinj and Poreč. Yet it is a thriving city, as becomes the largest urban area and economic centre of Istria, with some of the finest Roman ruins anywhere in Croatia – most spectacular among these is its huge amphitheatre. There are popular beaches south of the centre at Medulin, Premantura and Stoja, cosy bars in town where you can acquaint yourself with a variety of local wines or listen to live jazz, a terrific open market, and Istria’s main archaeological museum.

Pula’s amphitheatre was probably built during the first few years of the 1st century ad, during the reign of the emperor Augustus, and was completed in its present form under Vespasian (AD69–79), making it roughly contemporary with Rome’s Colosseum. It is one of the six largest surviving Roman amphitheatres in the world, slightly elliptical in plan and measuring some 132m x 105m, with an estimated capacity of around 20,000 spectators. Its remarkably intact outer walls reach a height of some 32m, with two tiers of arches surmounted by a third tier of rectangular apertures, and on the landward side (where the ground level is higher), only two levels. The walls also incorporate four towers, each with a spiral staircase that gave access to the seating areas, and with a water storage tank (supplied by an aqueduct), from which water was then distributed around the arena by channels. The underground passages, through which unfortunate gladiators once made their way into the arena to undertake bloody, mortal combat, now hold an exhibition of wine and olive oil production in Roman Istria. The arena itself now holds major concerts and operas, and some screenings of the Pula Film Festival, with seating for 5,000–8,000. It stands just outside the city walls on Flavijevska or Via Flavia, formerly the Roman road leading to Poreč and Trieste.