In 2002, on the 100th anniversary of its opening, the old Parenzana line was developed into a cycling and hiking route.

The Parenzana was a 123km-long narrow-gauge railway line between Trieste and Poreč, which ran from 1902 to 1935 and connected some 35 stations in Istria, and spanned what is now Italy, Slovenia and Croatia. It was used to carry both passengers and freight – olive oil, fl our, vegetables, wine, hides, salt from Piran, lime, and stone – navigating the hilly karst landscape between remote villages via a series of tunnels, bridges and viaducts.

In 2002, on the 100th anniversary of its opening, the old Parenzana line was developed into a cycling and hiking route, beginning with sections in Croatia and Slovenia and later the whole line. By far the longest section of the Parenzana is in Croatia (78km, compared with 32km in Slovenia and 13km in Italy), and among the towns and villages it connects between Poreč and the Slovenian border are Buje, Grožnjan, Oprtalj, Motovun, Vižinada, and Nova Vas. Over its history the Parenzana has had several names – to its Austrian builders it was the Parenzaner Bahn, to the Italians it was the Parenzana, in abbreviation it became TPC, and to the local population it was the Istrijanka or Istranka (or sometimes Poreška or Porečanka – after the town of Poreč, known as Parenzo in Italian). 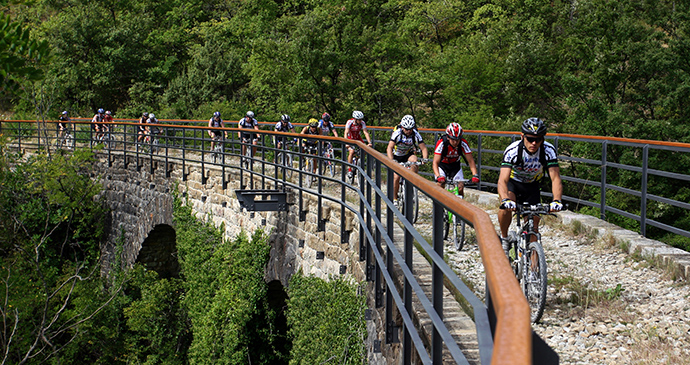 Pedalling the Parenzana © Istria Tourist Board