Szeged is a dynamic blend of significant past and carnivalesque present, a city whose spaces value both the contemplation of broad historical perspective and the escapist, bustling act of the here and now.

Szeged rivals any city in Hungary, and is a thriving rebuttal to those who view the Great Plain as an architectural and cultural wasteland. On the map, its layout – cut through by the Tisza and ringed by inner and outer semi-circular boulevards – bears a passing resemblance to the eastern side of Budapest, and in some ways it can hold its own in such exalted company. In the aftermath of destruction, the city aimed to reinvent itself as the most harmonious provincial settlement in the country. It carefully crafted its public spaces, and each of the squares has a character all its own: the green Széchenyi tér honours greats of the past; Klauzál tér cultivates an atmosphere of theatre and performance, studded with statues of harlequins and street artists (and is, appropriately, the place where Kossuth gave his last public ‘performance’); Dóm tér is more austere, institutional and ‘Victorian’, reflecting its academic and religious heritage (although revellers invade during the Szeged Festival); Aradi vértanúk tere commemorates the 13 Martyrs of Arad, executed after defeat in the 1848–49 War of Independence. The result is a dynamic blend of significant past and carnivalesque present, a city whose spaces value both the contemplation of broad historical perspective and the escapist, bustling act of the here and now. There are decent restaurants, theatres and nightclubs, a nationally renowned opera, several universities, and one of the country’s best cathedrals. If one were to be ultra picky, it could be said that the city is light on heavyweight museums, but in every other way Szeged shines bright. 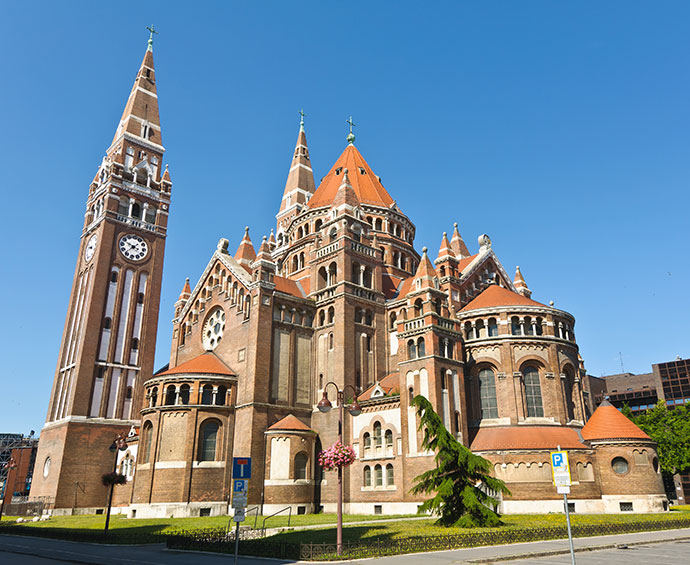 Szeged’s Votive Church is undoubtedly among the outstanding pieces of ecclesiastical architecture in the country © Dbtale, Shutterstock

Around 15km from the Serbian border, Szeged sits just below the confluence of the Tisza and Maros rivers and during the early medieval period was a distribution centre for salt shipments brought on the Maros from Transylvania. Szeged was traditionally favoured by Hungarian monarchs, and flourished as a result. Its growth was inevitably stunted between 1543 and 1686 under Turkish occupation, although it represented the centre of the sultan’s lands and came under his protection. The real setback came a couple of centuries later. During the night of 12 March 1879 the city was engulfed by floodwater from the Tisza. Morning revealed the horrible extent of the damage: 95% of the buildings – 5,700 of the 6,000 – had been wiped away. A massive programme of reconstruction followed, bold Eclectic and Art-Nouveau architecture and avenues emerging from the muddy slush; sections of the Great Boulevard bear the names of European cities (such as Vienna, Paris and London) that aided the recovery. Szeged went from  strength to strength, becoming a centre of textiles, salami production and paprika growing, and one of Hungary’s leading university cities. It is now the economic, cultural and academic capital of the Southern Plain.