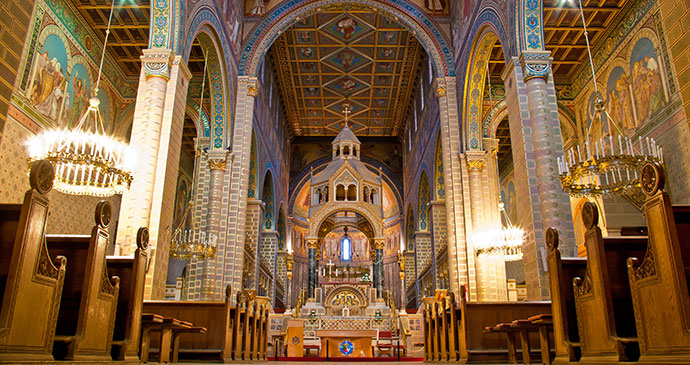 The cathedral The interior is decorated with paintings by premier historicist artists Bertalan Székely and Károly Lotz © Balazs Toth, Shutterstock

It would be a cantankerous soul who didn’t like Pécs, a shifty sort who’d tell you that right was left and red was green before wriggling out of paying his bar tab. A man not to be trusted, you understand. Once you pass through the featureless modern suburbs, you’re greeted by a wonderful city that combines old-world charm with contemporary vibrancy, one that contains a premier cathedral, a host of conveniently placed museums and some worthy restaurants, and that is atmospheric by night and friendly by day. You’ll see in a shot why it is second only to Budapest on the tourist itinerary.

You’ll see in a shot why Pécs is second only to Budapest on the tourist itinerary.

Summer lingers long in Pécs, which is shielded from northern winds by the Mecsek Hills and wallows in a sub-Mediterranean microclimate. It’s no surprise that the Romans felt at home here, establishing a town called Sopianae that was by the 3rd century one of the administrative centres of the province of Pannonia. They cultivated vineyards and fruit trees on the southern slopes, a sweet and lasting legacy that in the 15th century inspired the humanist poet Janus Pannonius to trill (in Latin) about the wonders of the late-blossoming almond trees. As the city grows and houses creep up the hillsides, viniculture is less of an enveloping presence than it once was, but vines are still harvested to the east and west of the centre, and older residents refer to themselves as tüke (a word deriving from the Hungarian for ‘vinestock’).

In 1009 King István made the town an episcopal see, and Lajos the Great opened the country’s first university in 1367, when it became a stronghold of Hungarian Renaissance culture. Ottoman occupation had a significant impact; while other settlements during this period were often left to rot, Pécs developed into a thriving oriental centre of commerce and academia. The city held 17 mosques. The residue of this Turkish influence is clearer in Pécs and its architecture than anywhere else in Hungary. Damage was heavy during the fight to remove the Turks, but the city rose again on the shoulders of vintners, coal miners digging in the Mecsek, and leather workers continuing an industry imported by Balkan immigrants. Factories producing luxury goods sprouted, among them Hamerli Gloves, Angster Organ  and Zsolnay Ceramics. After the reshaping of borders through the Treaty of Trianon, Pécs’s traditional place as a hive of learning was restored when the Hungarian University of Arts and Sciences was moved here from Pozsony (Bratislava) in 1921; in the 1970s, the city’s ‘Museum Street’ was established. The fresh intellectual and cultural energy is palpable, particularly when festivals are in full swing.