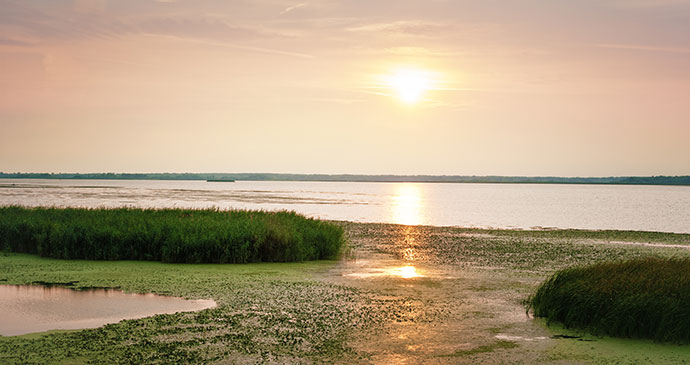 Lake Tisza is the place for those interested in fish, birds and nature photography. It was created in the 1960s and ’70s, when the River Tisza was dammed as part of the development of an irrigation system on the Great Plain. A happy by-product, it was hoped, would be a lake to rival Balaton. Lake Tisza spans 127km², and is treasured for its pristine natural environment, water-chestnut fields, mass of lily pads, winding channels surrounded by lush flora, and thriving birdlife. Two-thirds of it comprises significant wetland areas best visited in small boats capable of navigating the dozens of narrow courses. Scores of small islands, dead river arms and marshes make the lake popular with anglers, the experienced among whom know the deep or shallow points, the portions where catfish lurk and where carp are abundant. Indeed, it’s claimed that there are more than 50 types of fish in the Tisza river and lake, which are stocked to keep supplies plentiful. Because the river runs through the lake, there are also sections of choppy water that are ideal for water sports.

The lake can be divided into three parts. That north of Highway 33 is a bird reserve and part of Hortobágy National Park, as is the middle portion with its giant white water lilies and colonies of heron and cormorant that can be visited by following established trails (many of which are barred to motorboats). Other parts of the lake (the Sarud and Tiszafüred basins and the southern Abádszalók section) are where the splashing and sporting takes place.

Those who want to avoid the crowds of Balaton come here instead. Bird lovers delight in nearly 150 species of bird nesting around the lake, and generally visit during the months between April and October. Note that it is forbidden to approach nests during the hatching period in April and May. Besides bird watching, the lake’s shores are popular with cyclists, horse riders, boaters, fishers and sunbathers. Since the last edition of this guidebook, the tourist infrastructure has developed significantly around the lake, and it’s somewhere that will genuinely reward ‘outdoorsy’ types.