Balaton is the largest lake in central Europe, and its shallow depth means both that it is relatively family-friendly and that it warms up quickly in the sun.

The ‘Hungarian sea’ in the middle of Transdanubia is where Hungarians come to play. They’re not the only ones. During the communist period, the lake represented a convenient meeting place for those divided by the Berlin Wall, and Germans continue to provide a decent chunk of the tourist revenue. With a length of 77km and a total area of 600km2, Balaton is the largest lake in central Europe, and its shallow depth (particularly on the southern side) – on average, just two–three metres – means both that it is relatively family-friendly and that it warms up quickly in the sun. The water harbours ample stocks of fish such as carp, bream and the native fogas (pike-perch), and is a popular place for windsurfing and rowing. Motorboats are prohibited, so you will not find yourself swamped in a waterskiier’s wash; instead wakeboarding – where the skiier is pulled around a circuit by a mechanised pulley – is very much de rigeur.

There’s a distinct north-south divide where the lake’s concerned. The southern shore is the favourite with the water-baby masses intent on sunworshipping, soaking and wakeboarding, and where the real concentration of hotels, bars and clubs is to be found. The southern resorts attract those with young children and the party crowd, and Siófok – stretching for a full 15km – is the brash leader of the pack. On the other side of the lake, the reeds, volcanic hills and cooler water make for an atmosphere less fevered: Keszthely is a university town that has a life beyond the tourist season; Balatonfüred has always taken its water with a graceful air; Tihany and Badacsony have stunning scenery and wonderful walking terrain. The northern side also boasts the best of the wines. 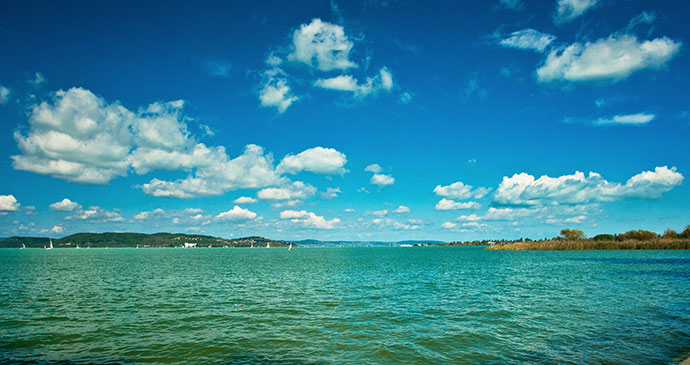 It used to be the case that the main season at Balaton lasted over three months, and the water is certainly a pleasant enough temperature in late spring and early autumn. However, the hotels and restaurants have been flogging the cash cow with increasing severity, and it is noticeable that the season appears to have narrowed as many potential visitors look for cheaper beach holidays elsewhere. Despite that, the most popular resorts heave with bodies in July and August, and you’d be wise to come outside those months if you can possibly help it.

Balaton is easily reached by train from Budapest Déli, and by bus or train from other towns in Transdanubia. Buses and trains are convenient links between resorts on the same shore, but the ferry is the way to go if you want to get to the other side – indeed even if you don’t, it’s a pleasant way of viewing the lake from a different angle. From April until October, ferries for foot passengers travel a route between Siófok, Balatonfüred, Tihany and Balatonföldvár, and between Fonyód and Badacsony; during the high-season months these run more often, and there are additional services to other resorts around the lake. There is only one crossing available for cars, that between Tihany and Szántód.