The place drips with romance, the legends alive from the days when cattle herders, shepherds and cowboys were abundant on the puszta.

Hortobágy, 25 miles west of Debrecen, is a tiny village in the thick of the vast Hortobágy National Park. This area looms very large in Hungarian folklore and poetry, and the image of horsemen in traditional garb galloping across the wide plain is as much a part of the country’s identity as goulash and Bull’s Blood. The place drips with romance, the legends alive from the days when cattle herders, shepherds and cowboys were abundant on the puszta. There are homesteads, barns and longhandled shadoof-like wells (gémeskút); ancient burial mounds (sírdomb) are also conspicuous when they break the pancake-flat landscape. A recurrent phenomenon recorded in literature is the appearance of ghostly forms here, from broad cities to solitary human figures. These mirages (known as délibáb) are said to form during muggy summer days, when layers of humid air with different temperatures come together. The tourist industry has very much hitched its wagon to the Hortobágy’s mystique; be prepared for the ubiquitous overblown horse shows and busloads of tourists ushered in for packaged versions of old-style Hungarian living. 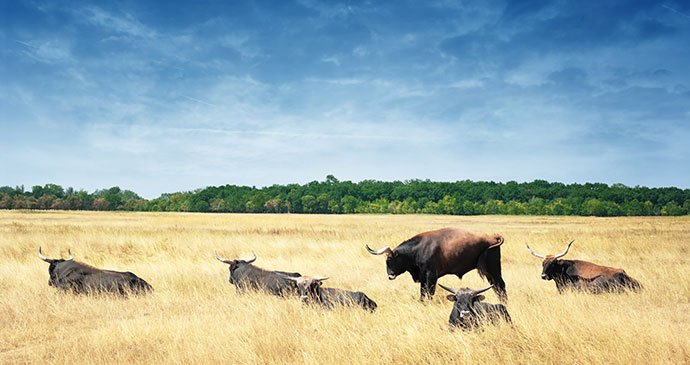 Although Hortobágy includes the largest area of grassland in central Europe, it also has its marshy swampland. Hortobágy village is the place to start your exploration, and is where the majority of the restaurants, hotels and facilities are located (although most visitors come on day trips). Animal breeding and keeping is one of the prime occupations at Hortobágy, and it is famous for its animal park. The animals presumably keep a wary eye on the Hortobágy Csárda across the river, which dishes up some of the Hungarian special breeds for eating. Another classic Hortobágy site is the Nine-Arch Bridge, where the Bridge Festival is held each year.

This is horse country, and riding schools abound; for the less active, there are carriage tours too. Otherwise the national park is full of walking paths and birdwatching areas, and is best visited in the warmer months. Few come in winter, but if you do, be prepared for biting winds blowing across the flat landscape. An admission ticket is required to visit a few protected areas of the park (j900Ft/day from the visitor centre), including some cycling routes, and some others are only accessible with a guide (contact a specialist tour company).