Eger and the Mátra Hills

Resting in the valley of the River Eger, between the Mátra and Bükk ranges, Eger – from the Latin word ager (earth) – is one of the country’s charmers, an enchanting town of cobbled streets, Baroque buildings and Bull’s Blood (Egri Bikavér). It is easy to see why visitors flock here and coo. But Eger is not just a pretty face; its defiance of Turkish force in 1552 was immortalised in the 1901 novel Egri Csillagok (Eclipse of the Crescent Moon) by Géza Gárdonyi (1863–1922), and its citizens became linked in the Hungarian mind with the most spirited of patriots.

Look down from the fortress at the many church steeples spiking the skyline and you’ll understand why it earned the nickname ‘the Hungarian Rome’. 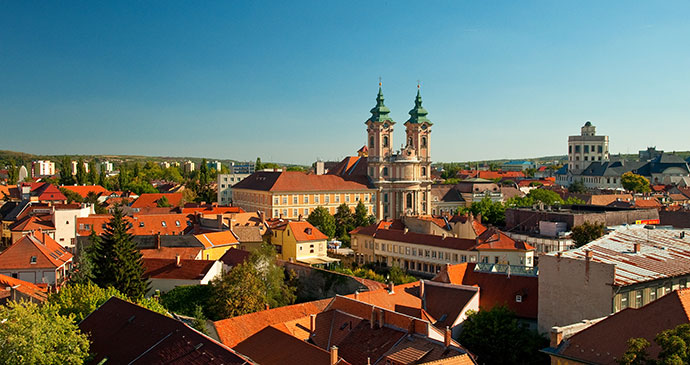 The enchanting town of Eger is one of the country’s charmers © Botond Horvath, Shutterstock

Settled by the Magyar tribes, Eger was made a bishopric by King István in the 11th century. Its rise as a significant centre of Renaissance culture was curtailed by the Turks. The womenfolk of the town famously fought shoulder to shoulder with István Dobó’s 2,000 soldiers in repelling the first siege in 1552. The victory over a far superior force was acclaimed around Europe, and effectively stalled (temporarily) the spread of the Ottoman empire. It was also during this struggle that Dobó’s troops are said to have been issued with wine – which the attackers mistook for bull’s blood – to assist them in screwing their courage to the sticking place. There was considerably less backbone on display when the Turks returned in 1596, however, and a defending garrison of mercenaries surrendered with barely a whimper (excepting, it is hoped, the trumpeter, who was apparently a deepchested Englishman). Despite a promise of safe passage, the Walloons (who had repopulated the town after the Mongol invasion in 1241) among the many foreign fighters were slaughtered mercilessly in revenge for their part in an earlier massacre of Ottomans living in nearby villages. Today a solitary minaret and a few bath stones are the only reminders of the occupation that lasted until 1687.

Eger was heavily involved in the War of Independence led by Rákóczi, and the Habsburg Emperor Leopold crippled some of the castle fortifications to ensure it couldn’t be used by freedom fighters. There was swift development of the town during the rest of the 18th century, with the construction of private houses and ecclesiastical buildings. Look down from the fortress at the many church steeples spiking the skyline and you’ll understand why it earned the nickname ‘the Hungarian Rome’.