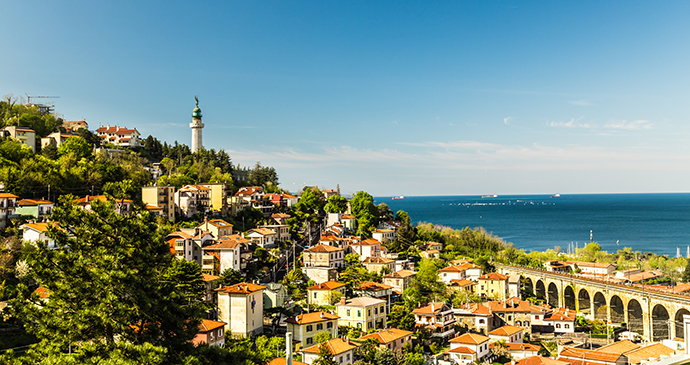 Trieste is an enthralling cosmopolitan city of a hundred faces © zakaz86, Shutterstock

It seems entirely possible that just by being itself, Trieste someday soon could be the Next Big Thing.

There’s no city in Italy quite like it: the one place where you’re more likely to see sausages and sauerkraut on your plate than pasta and tomato sauce, where the most impressive church is Serbian Orthodox, where there are 67 different ways of ordering a cup of coffee. Trieste is multi-lingual, mitteleuropäisch, and mad about culture, a city with 32 museums and a great love for good music. It is the only city where we’ve ever been chased down the street by a klezmer band on stilts.

Once a true world city, the main seaport of the Austro-Hungarian Empire, two World Wars left Trieste a woebegone widow of the Adriatic, a grandiose Neoclassical city shorn of its raison d’être. Film titles like Sleeping Car to Trieste and Fugitive in Trieste (all filmed elsewhere) captured the post-war image of the place as a grim town on the hem of the Iron Curtain, fraught with spies and danger.

With the fall of that Curtain, all this has changed: Trieste is now a very merry widow, quickly regaining its old cosmopolitan lustre, its past something that the inhabitants accept as simply another twist in a very knotted history. The streets and shops bubble with a babel of Slovenian, Croatian, German, Hungarian and Czech, and cars bearing an exotic bouquet of number plates clog up the straight, Habsburgian, 18th-century streets. After decades of a depressed economy, trade is finally picking up too, with the help of some cutting-edge scientific research, with Slovenes and Hungarians flashing new-found wealth, and German and Czech businessmen seeking new Mediterranean markets.

Thanks to their geography and their difficult history, the Triestini often speak of their sense of being ‘at the end of the world’ (or at least, the end of Italy, which is the same thing). Jan Morris shares the same feeling in a brilliant book, her last: Trieste and the Meaning of Nowhere. After dwelling on Trieste’s odd destiny, its unique character and sense of place, she concludes: ‘To my mind this is an existential kind of place, and its purpose is to be itself.’

What struck Morris the most about the Triestini was their everyday kindnesses, their decency and cultured civility. Perhaps in the tough years Trieste was simply doing what good cities do in times of adversity: they ride it out and take the opportunity to perfect their discreet charms.

It’s a new world, and Trieste is at the end of it no longer – it’s all one free, amiable Europe now, in every direction. Instead of existential melancholy, you can sense the energy and excitement of a city shaking off decades of troubles and decline. The city still has some work to do, but it seems entirely possible that just by being itself, Trieste someday soon could be the Next Big Thing.