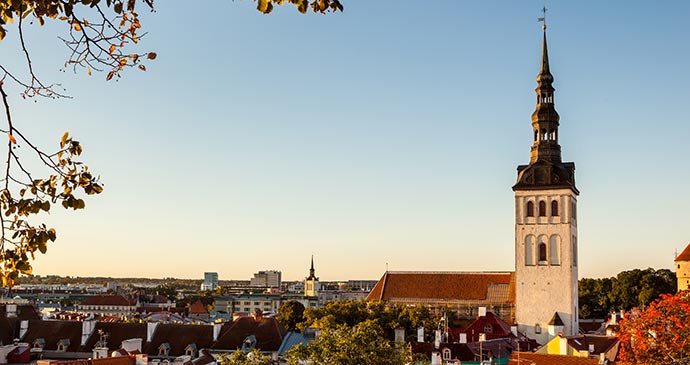 In 1991 Estonia’s independence was re-established and only 13 years later it joined NATO and the EU; in 2011 it joined the euro. Its journey from being an enforced Soviet backwater to an integral part of Europe had come to an end. This journey affected visitors as hotels became refurbished, museums revitalised and roads able to handle the increasing amount of traffic. Politically this is a time when Estonia can be proud of what it has achieved and when greater optimism than ever before can be shown towards the future.

The government has been in power for longer than almost all other European ones and relations with Russia seem finally to be improving as tourists from there pour in and as the Russian government slowly accepts Estonia as an equal rather than as a renegade. There might even be a border treaty between Estonia and Russia in the coming years. In recent years, Tallinn has been the European Capital of Culture, which has helped to extend its range of attractions. It now has its Seaplane Harbour Museum and a revitalised Television Tower.

Politically this is a time when Estonia can be proud of what it has achieved and when greater optimism than ever before can be shown towards the future.

Although on a smaller scale, the cultural scene all over the country has become more welcoming and less introspective than used to be the case. Whether at Saatse, a few metres from the Russian border, or in Pärnu on the Western coast, formerly bland museums are now making serious efforts to reach out to both the local population and to foreign visitors.

The star attraction in this field may remain the Transport Museum near Polva, which entrances equally children, their parents and their grandparents but many others are making serious efforts to catch up. ‘Catching up’ is a phrase that will apply from 2014 to the railways as well, as schedules multiply and decaying rolling stock is removed. A particular pleasure in the summer of 2013 was to take one of Tallinn’s new suburban trains. No longer will the buses have a monopoly on all major travel routes in Estonia.

My first visit to Estonia in 1992 was an adventure, travelling with a suitcase of soon to be useless Russian roubles and wondering where I might next get petrol for the car. The adventure has now gone, and I have no regrets about that. What gave me pleasure then, and still does, were the space, the sense of calm and the great cultural diversity that Estonia offers. Culture may be a provocative art exhibition, a quartet playing in a church or thousands singing at a song festival, but it will always be there, throughout the year and throughout the country. What has been added is colour and gastronomic diversity.

Since then, painters, designers, restorers and landscape artists have all had their part to play in ensuring that a walk in any Estonian town is now a pleasure.

Estonian towns were grey in 1992 and I was often relieved to see green weeds as the only contrast in decaying concrete slabs. Since then, painters, designers, restorers and landscape artists have all had their part to play in ensuring that a walk in any Estonian town is now a pleasure, in the town centre or in the suburbs, in a park or by the sea. When that walk is over, where to eat will no longer be a question of necessity, but of choice, and often of a large choice. Eating a Korean meal in Valga, 200m from the Latvian border, or a Chinese one in Narva, 500m from the Russian border, is an immediate pointer for overland travellers to the diversity the country now offers. Estonia may have a population of only 1.3 million but it is truly international throughout.

In 2012 half-Estonian, half-Russian writer Andrei Hvostov called his country ‘the Estonian Republic of Unsaid Things’ as he wrote about the secrecy of Soviet times continuing well after the collapse of that regime. He was happy to play the iconoclast, raising many issues dating back to World War II that others had been happier to ignore. There is a parallel with tourism here, given the many places in Estonia that deserve more visitors than they currently see. If visitors feel I have revealed most of what is wrongly ‘unseen’ in Estonia, I will be more than content.

Until 1992, Estonia was a vague concept in my life, somewhere that should still have been independent, but which had been swallowed up into the Soviet Union. I went for the first time then with little interest and with little knowledge. On that occasion, I was in Estonia for only four days, but I became addicted at once and am now there at least six times a year; I have a flat in Tallinn to prove my long-term loyalty. I am glad that I could pass on my enthusiasm to Bradt at a time when, to other publishers, it was simply ‘The Baltics’.

On that occasion in 1992, I was in Estonia for only four days, but I became addicted at once and am now there at least six times a year.

Researching this guide makes me feel young again. I visit bars that have an unspoken upper age limit of 25. I am often to be seen in restaurants well after 23.00 and in clothes that should not have been brought into the 21st century. How convenient that no museum opens before 10.30 so that my curtains need only do so at 09.30. With Tallinn Old Town being Estonia’s only serious hill, I am even kept fit.

I am happy to enjoy an easier life than most Bradt writers. Buses and trains run to time and are sufficiently comfortable for me to keep notes and to reach all of Estonia’s borders. However, journeys in them do not provide enough time for me to master the 14 cases in the Estonian language. In the meantime, I must thank all the English-speaking Estonians who have endured my barrage of emails and frequent visits. We share the same enthusiasm and I am sure we will continue to do so.