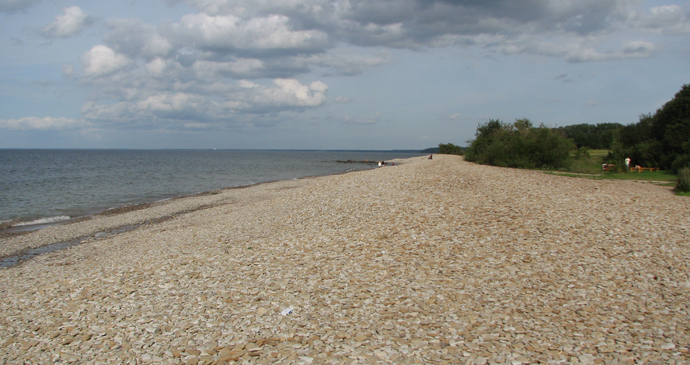 Stretches of shingled beach in Sillamäe – the wide stone steps to the seafront were clearly modelled on the Crimea © Hendrix Eesti, Wikipedia

At long last it is possible to picture Sillamäe as it was in the 19th century when Tchaikovsky was just one of many Russian musicians and artists who came here during the summer. Natural colour is returning with its trees and flowers and the pastel decoration on the larger buildings has now recovered from 40 years of pollution. The wide stone steps down to the seafront are clearly modelled on the Crimea. On a hot summer’s day it might be possible to think one is in Odessa.

Architecturally, it is possible to use the word ‘Stalinist’ in a positive sense as the neo-classicist buildings in the town centre all date from the early 1950s, although one has to mention that many were constructed by German prisoners of war held in the Soviet Union until 1955. Because it was the Soviet scientific and military elite who came to live here, the standard of architecture is much higher than might otherwise be expected. Two buildings from that time, the cultural centre and the cinema, have preservation orders on them. Marx and Lenin look down on the audience from beside the stage in the cultural centre.

At long last it is possible to picture Sillamäe as it was in the 19th century when Tchaikovsky was just one of many Russian musicians and artists who came here during the summer.

The foyer in the cinema is as large as the auditorium, and full of chandeliers and broad pillars. It has kept the Soviet name Rodina (Motherland).When it opened in 1955, it offered six showings a day to cater for the many shift workers in the town; this was of course well before television became widespread in the USSR. Both buildings are usually open every day, and then in the evenings as well if performances are taking place. The basement of the cultural centre was built as a bomb shelter and it may be converted into a ‘nuclear’ museum describing all the top secret activities that took place in Sillamäe during the Soviet era.

The population of Sillamäe is Russian-speaking, although all signs are in Estonian. A few road names that would not be acceptable elsewhere in the country have been kept here, such as one that commemorates the spaceman Yuri Gagarin. The Town Hall stands out as not being an obviously Soviet building, even though it dates from 1949. The Lutheran tower gives a slight medieval feel to it, although the vases with palm trees that line the entrance steps bring it back to southern Russia. (These trees are kept during the winter in glasshouses, so are firmly protected from the northern winter.)