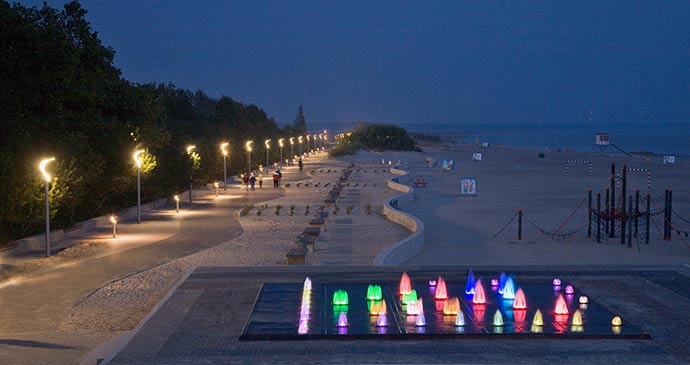 A view over the iconic Pärnu beach at night © Visit Estonia

Admitted to the Hanseatic League in 1346, the port for many centuries rivalled Tallinn and Riga, but since the 19th century has been better known as a health centre and seaside resort, as well as for its yachting harbour, so it competed more with Haapsalu. As a health centre, it was less successful than Haapsalu, but it more than made up for this with its success as a resort. Estonia’s most famous man, pre-war president Konstantin Päts, and Estonia’s most famous woman, the 19th-century poet Lydia Koidula, both went to school in Pärnu. Koidula’s school is now a museum about her life and a statue in her memory was unveiled in the park in 1929.

The town council granted permission for the building of the first bathing centre in 1837 but support was so poor that in 1857 public bathing on the beach was banned in the hope that this policy would force more people to use it. The council took complete control of the centre in 1889 and in 1904 installed electric lighting; the centre burnt down in 1915 and only in 1927 was a new building opened. Fortunately the council realised at the turn of the century that Pärnu needed to cater for the healthy as well as for the sick. The park was laid out, the yacht club established in 1906, and between the wars it attracted many foreign visitors.

Relax with Estonians all through the summer at their smoothest and longest beach.

By 1938, over half of the 6,500 summer tourists were from abroad, Finns and Swedes replacing the Russians as there was a ferry service each summer between Stockholm and Pärnu. The yacht club closed during the Soviet period but is now thriving again. In other fields, the town council has been active in broadening the economic base of Pärnu. Small- and medium-size firms have been established in foodstuff s, textiles and timber, many with foreign backing; companies from 30 different countries now invest here.

Yet tourism is likely to remain the backbone of the economy for the next few years, as the number of visitors each year climbs rapidly towards 100,000. Most still come in the summer when music lovers can enjoy a jazz festival, a zither festival and classical music concerts. Film shows, art exhibitions and opera, combined with much lower hotel prices, make visits at other times equally worthwhile. Spa hotels have their regular guests from Sweden and Finland year-round. Dates of all these events are on the website of the local tourist board, www.parnu.ee; prebooking of hotels during most of them is essential.