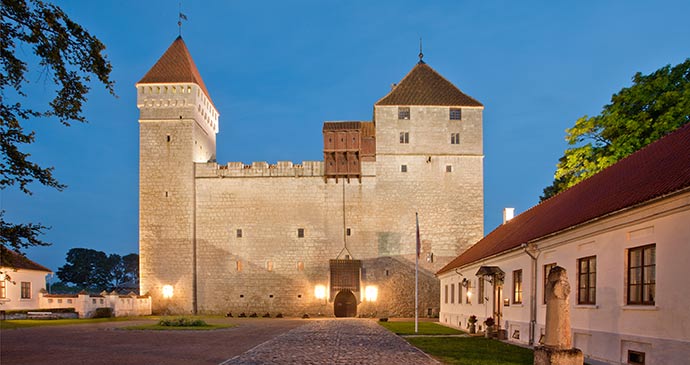 The well-preserved fortress is the ideal place to start a tour of Kuressaare © gadag, Shutterstock

Without doubt, a tour of Kuressaare must start at the castle (www.saaremaamuuseum.ee), the best-preserved medieval fortress in Estonia, which for many centuries combined the role of episcopal residence, prison and sanctuary. The basic quadrangular structure took 40 years to build between 1340 and 1380 and the massive walls were added in the 15th century.

The Germans, Danes, Swedes and Russians all maintained the original structure but the Russians withdrew their garrison in 1836 and from then the castle no longer had any military significance so escaped damage in later wars. It was therefore not attacked by the British during the Crimean War. Vestments and weaponry from each of these periods survives and is on display. Not even bishops could live flamboyantly on Saaremaa in the Middle Ages. Austerity and simplicity are the impressions that remain. The original heating system still functions. Fortunately an early penal system does not – those sentenced to death in the second-floor Hall of Justice were allegedly thrown down a 20m shaft to be devoured by the animals waiting eagerly below.

There is an extensive exhibition of the history of Saaremaa up to 1940. The later period is of most interest to visitors; a wide range of memorabilia from the first independence period was hidden during the Soviet occupation but is now on view and is described in English. This section could do with a redesign but at least the exhibition that opened in 2006 makes up for this. It covers the German and Soviet occupations, concentrating in particular on the World War II period. It is ‘hosted’ by a wax model of Konstantin Päts, Estonia’s pre-war president whose last major tour outside Tallinn was to Saaremaa on 20 and 21 August 1939.

Kuressaare Castle is the best-preserved medieval fortress in Estonia, which for many centuries combined the role of episcopal residence, prison and sanctuary.

Films and recordings bring that tour back to life and show the genuine enthusiasm with which he was welcomed. On 23 August, his subsequent fate was determined by Germany and the USSR in the Molotov–Ribbentrop agreement. A year later he would be in prison in Russia, as would be most of his cabinet colleagues, and many would soon be dead, although Päts himself was not in fact executed by the Soviet authorities and lived on in prison until 1956. For all Estonian visitors, the message is very clear. The 50 years between 1940 and 1990 were a mixture of horror and waste.

The year 1988 was the year of absurdity as the exhibition makes clear. On 28 January, the leadership of the Estonian Soviet Socialist Republic banned displays of flags and emblems of ‘countries that had existed earlier’. On 23 June the same people would officially declare that blue, black and white were again the Estonian national colours.

It is easy to miss the natural history gallery, housed in a basement close to the entrance. Apart from displaying every animal and plant that can be seen on Saaremaa, it has a special section devoted to juniper wood, on which the island’s economy will doubtless continue to be based. It is a very flexible material for furniture and the berries are a basis for gin.

During the summer, there is a full programme of concerts inside the castle; the surrounding park often hosts song festivals and carnivals. The castle stays open in theory till 19.00 every night during the summer but be ready to do battle with recalcitrant staff if you want to stay after 18.45 as they are determined to slam the doors on visitors as early as possible. From the photographic point of view, the best shots of it are to be had from the port during early evening.