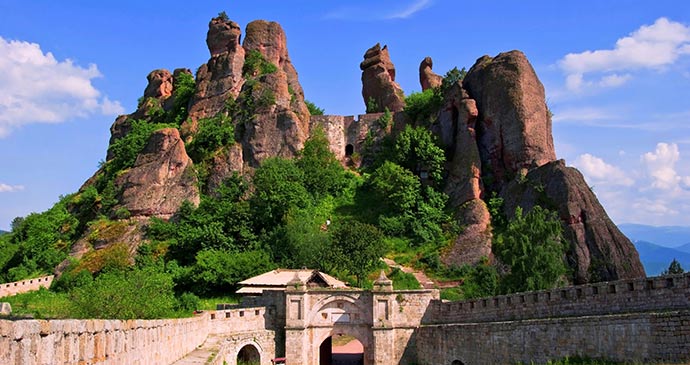 Over 50km² of dark red rocks in strange shapes and groups, Belogradchik is the inspiration for many local legends.

The attraction of Belogradchik is the rocky landscape. Local people have given names to the most distinctive rocks: the bear, the mushrooms, Adam and Eve, the monk, the camel, the cuckoo, the horseman and many more. Legends about the origins of the stones abound. In the past, one such story relates that there was a nunnery near the rocks. Sister Valentina, who took the veil and joined the nuns, was said to be very beautiful and rumours of her loveliness spread far and wide, even reaching a poor shepherd boy called Anton. Every night he tried to woo Valentina by playing his shepherd’s pipe beneath her window. Apparently the musical Romeo was successful and Valentina fell in love with him. Later she gave birth to a child and was of course expelled from the nunnery. God’s anger was turned on the convent and all the nuns were turned to stone; Valentina became a stone Madonna and poor shepherd Anton waits for his love among the stone figures.

In fact, the rock formations are a result of millions of years of geological activity as stratified rocks were covered by a sea in which river sand, gravel and clay were carried. In time these materials were joined together by silicon or sand-clay solder. Local iron oxide caused the redness. Other rocks of grey and white limestone were piled on top in some places during the Jurassic period, and because of the different levels of hardness the rocks have eroded unequally, thus creating the fantastic outlines of today. Amid this rockscape are caves and waterfalls, and the area is a haven for many unusual flowers and birds. We saw the exceptionally rare Ramonda serbica when we were there.

The citadel, which is built into and amid the rocks, is the destination of most visitors. Its obvious strategic significance means that it has been a fortified site since Roman times, with Bulgarians and then Turks adding to its defences. Over time it has been the guardian of the approach to the Belogradchik Pass and a Turkish garrison intended to overawe the local population.