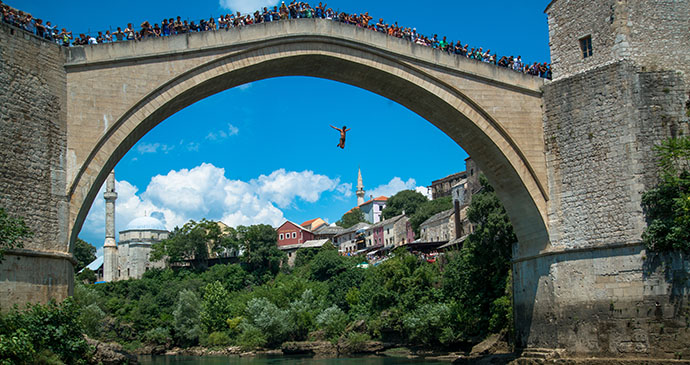 A diver plunging from Mostar’s iconic bridge into the Neretva © Pe3k, Shutterstock

Unlike in most tourist places in the world, café and restaurant owners in Mostar will never ask you to leave, even if you’ve been sipping a Turkish coffee for 2 hours.

In medieval times Mostar was no more than a tiny settlement along the banks of the mighty Neretva River. Fifteen kilometres to the south is the ancient settlement of Blagaj, which from Illyrian times up until the Ottoman invasion remained the centre of political power. It is said that before Herzegovina fell to the Turks, the settlement of Mostar had only 19 houses with a small suspension bridge that united both banks. With the arrival of the Turks came relative peace and stability, which meant the mountain-top fortresses used since Illyrian times, particularly by the Bosnian aristocracy in the centuries before Herzegovina fell, lost a great amount of their significance. The fertile but exposed valley where Mostar is now located proved an ideal place to build a city – and that’s exactly what the Ottomans did.

Mostar became one of the major socialist strongholds in Yugoslavia. It had the highest rate of mixed marriages and continued to be the dominant city of Herzegovina. The city enjoyed great prosperity in the years leading up to the disintegration of Yugoslavia. The entire old town was heavily damaged by ceaseless bombing. On a cool autumn day in November 1993, the bridge that had united Mostar for over 400 years was destroyed by dozens of tank rounds from the Croatian side. Reconstruction of the bridge was completed in early 2004, paving the way for a new chapter for Mostar. It is now officially a ‘united’ city but it still remains divided along ethnic lines. To the visitor the ethnic division may not be evident, but nationalist parties on both sides have redrawn Mostar’s municipal boundaries to suit their demographic dominance.

It’s safe to say that the Unesco World Heritage Site of the Stari most (Old Bridge) has always been the main attraction in Mostar. The old town is very compact and is ideal for a walking tour, and most of the main tourist sights can be seen in one day. As there are as many cafés in Mostar as there are pubs in London, it’s never difficult to find a cool spot to take a break from the hot Herzegovina sun. The old town has an enticing quality, particularly on the Neretva, which encourages you to sit for hours and just soak up the sights and sounds. Unlike in most tourist places in the world, café and restaurant owners in Mostar will never ask you to leave, even if you’ve been sipping a Turkish coffee for 2 hours.

Mostar is situated in one of the most beautiful valleys on the Balkan peninsula. There are many excursions for all types of tourists.