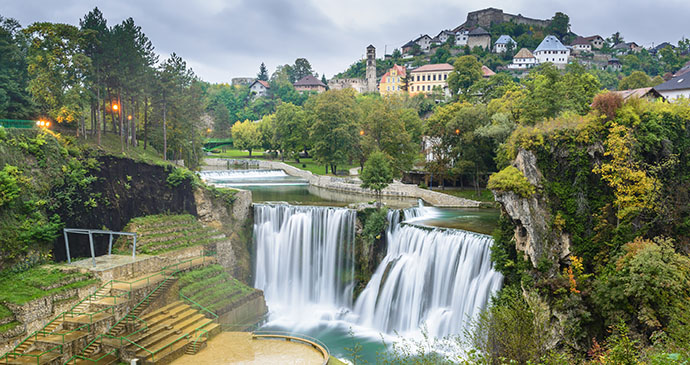 Jajce’s waterfalls are in the centre of the city © Alberto Loyo, Shutterstock

No other town in Bosnia and Herzegovina can boast so many cultural layers and such numerous architectural styles in a place so small.

The time will soon come when this town realises its tourist potential. The brighter side of Jajce is the spectacular medieval citadel set on top of the hill in the middle of town. Hugging the old fortress are beautiful Ottoman-style homes, and rushing below them are two spectacular 27m waterfalls on the Pliva River. No other town in Bosnia and Herzegovina can boast so many cultural layers and such numerous architectural styles in a place so small. The 3rd-century sacred temple dedicated to the god Mithras, from Roman times, sits side by side with the most valued example of medieval architecture in the old steeple of St Luke’s Church. Beneath the church are the catacombs, where high priests and the nobility were buried. The Esma Sultan Mosque, the most prestigious in the region, was destroyed during the past war. These sites are open to the public, the only problem once again being that there is no information office, website or many signs around town to point you in the right direction. The town may seem a bit dead at first, but after a good wander around the citadel and through the old part of town things just seem to come to life.

The outskirts of town are blessed with an abundance of water, which is probably what made it so attractive and practical as a settlement in earlier times. The Vrbas and Pliva rivers have been a favourite fishing and swimming hole since the hydroelectric dam was built in the 1970s, creating the large artificial lake. The Vrbas Canyon is an amazing drive if you’re heading to Banja Luka. In the other direction up the Pliva River is the greatest collection of old mills in the country. In the wide areas of the Pliva, you can find many mills that were built during Ottoman times. In the past families would gather here to work, grind wheat, wash clothes and collect water. Most of the mills are still in decent shape, and some remain in use.