This is a land full of ancient towns and villages that repay the close attention of admiring visitors many times over.

The region of Grodno is situated in the northwest of Belarus and has borders with both Poland and Lithuania. The administrative and cultural centre of the region is the city of Grodno itself, with a population of 365,610. Situated 278km west of Minsk and just 294km east of Warsaw, it is only 20km from Poland and 40km from Lithuania. Records indicate that the city has been in existence for almost 900 years. Not surprisingly, given its location, it has a significant Polish and Lithuanian heritage.

The greatest wealth of the Grodno region consists of the leafy groves forming the magnificent tract of natural forestation that occupies more than one-third of its territory to the northeast and southeast of the city, either side of the historic town of Lida. Comprising both coniferous and mixed woodland, it is pleasing to see that pockets of the ancient virgin forests that once covered this whole continent have survived more or less intact here. 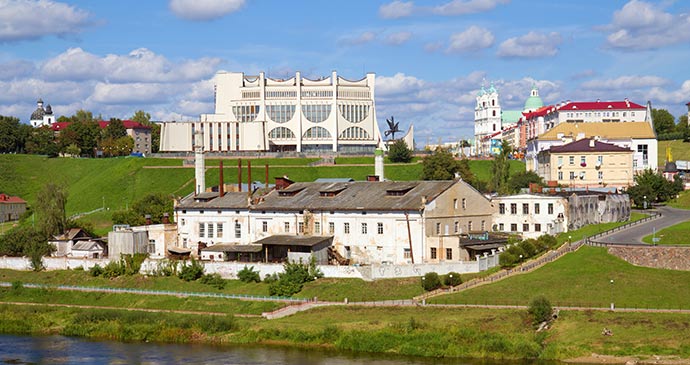 Grodno is renowned for its lofty feel and unique architecture © Eillen, Shutterstock

This is also a land rich in lakes, large and small, but all of them picturesque, with a reputation for crystal-clear waters. The renowned Avgustovski Canal also runs through the northwestern corner of the region for 22km on its meandering way to Poland. The charms of the canal and the many leisure services attendant upon it are promoted vigorously by the local tourism industry, which is particularly well geared up for incoming visitors from abroad.

The history of the region, characterised first by conflict and then by the ensuing peaceful coexistence of Baltic and Slavonic peoples, has left its mark on the territory. The original fortress of Grodno, built on the banks of the Nieman River in the 11th century, has now evolved into an elegant, thriving, bustling, energetic and cosmopolitan modern city, where more examples of Classical architecture have been preserved than in any other city of Belarus. Indeed, the national state government has declared the historical centre of Grodno a special architectural zone under the protection and jurisdiction of the state itself. Of the country’s major cities, it is perhaps Vitebsk and Grodno that best lend themselves to an appreciation of their charms, apparent if you meander through the streets at a leisurely pace, gazing at the richness of the buildings that surround you.

There are also many fine examples of architecture in the region, most notably the beautiful 16th-century fortress of Mir, the dramatic ruins of Novogrudok’s 14th-century castle and a number of unusual military churches. During the 15th and 16th centuries, many of the Eastern Orthodox churches were required to serve the dual purposes of worship and as places of fortified refuge against the attacks of aggressors, and many of those that are still standing look more like towered castles. The best examples of these fortress-churches can be seen in the villages of Synkovichy (built 1407) and Murovanka (1524). In Smorgon, the 16th-century Calvinist cathedral is well worth a visit. And for students of topography and geometrical surveying, two of the points of the Struve Geodetic Arc included in the five within Belarus on the UNESCO World Heritage List are to be found within the oblast, in the districts of Oshmyany and Zelva.