The islands of Corvo, Flores and Graciosa have been recognised by UNESCO as Biosphere Reserves; protected areas designed to demonstrate an equilibrium between man and nature. 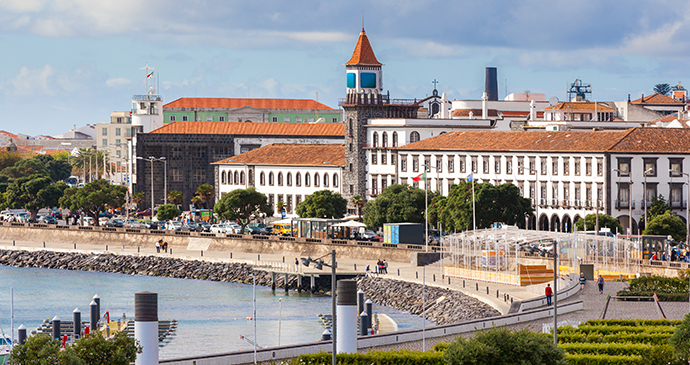 Flores is the westernmost island of the Azores and together with Corvo rests upon the North American Plate © Roman Sulla, Shutterstock

For many visitors, certainly for those seeking nature and tranquillity, Flores will be their favourite island. Not only have you now reached the westernmost island of the archipelago, you are also at the western extremity of Europe. Europe ends at Flores, the Isle of Flowers, on longitude 31° 15’ W, and 2,220km from Lisbon. Given the island’s small area, only 17km long and 12.5km wide, it is probably the most intensively rugged of the archipelago, with peaks, valleys, crater lakes, waterfalls and precipitous cliffs. Small pastures and arable fields all surrounded with hydrangea hedges or lichen-encrusted stone walls tie these together.

Everywhere the countryside is beautiful, and there is constant temptation to stop the car and quietly take in the atmosphere. For walkers, there is the ultimate in conversation stoppers: walking almost the entire length of Europe’s westernmost coastline (unless you count Greenland). In the calmer weather of summer, one of the finest ways to appreciate the island is to take a boat trip around the coast, part of which you will see anyway if you go to Corvo by sea. For manmade attractions, the two museums in Santa Cruz are the treasures 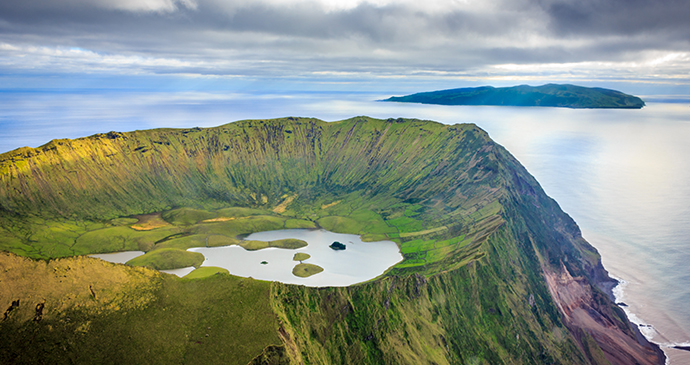 Remote Corvo island may be tiny, but its landscape is truly dramatic © Samuel Domingues, Shutterstock

Corvo is by far the remotest island of the archipelago and must surely rate as one of the most isolated places in all Europe. This ancient volcanic remnant is surrounded by an often cruel and savage ocean, and remained inaccessible for months at a time, even from its nearest island neighbour, until the advent of the aeroplane. It is the tiny elusive gem at the apex of the Azores crown. Day visitors from Flores making the boat crossing in settled summer weather account for most of the visitors, but for the true traveller intent upon getting a feel for this island (and for ardent birders who arrive in October looking for American ‘vagrants’), there are a slowly increasing number of accommodation options giving opportunities for longer stays.

On a day visit there should be time enough to walk to the road’s end to enjoy the view down into the crater which, at 300m deep and 2km across, is among the largest in the Azores. However, be warned: it is often shrouded in cloud. For those with more time, there are two official walks to do, and the island is an Azorean highpoint for autumn birdwatching. But the greatest delight must surely come from simply being on Corvo and freeing your senses to absorb its atmosphere of truly splendid isolation.

The general opinion is that Graciosa, meaning ‘gracious’, is the most relaxed of all the islands. Most certainly it would make for a great escape from the mainstream, a place to stay if ever strife and tribulation became too great to handle. Perhaps there has been little change, or at least slow changes in the past few decades. A roughly oval-shaped island lying southeast/northwest and the least humid island of the archipelago, Graciosa’s highest point is Pico Timão at only 398m. As a result, villages are distributed more or less equally across the countryside, and not located only around the coast – very different from some of its fellow islands. The pace is slow, men can still occasionally be seen travelling in pony traps or riding donkeys along the roads, there are at last some good restaurants, the walking is easy and everyone recognises the visitor second time round. The scenery is picturesque, an idyll of pastures and neatly walled enclosures, little clusters of whitewashed houses – with their peculiarly shaped chimneys – around village churches, occasional windmills with their distinctive red, onion-shaped domes (there were once 36) and all surrounded by a glittering blue sea. Like rare wine, it is an island to be enjoyed slowly. It is also, perhaps, a window into what the world could be like with fewer inhabitants.

Of greatest interest is the Furna do Enxofre, the cavern at the bottom of the caldera, first seriously explored in 1879 by Prince Albert of Monaco. The excellent, modern museum in Santa Cruz is worth your time. Otherwise, just relax and enjoy being on Graciosa, free from stress.