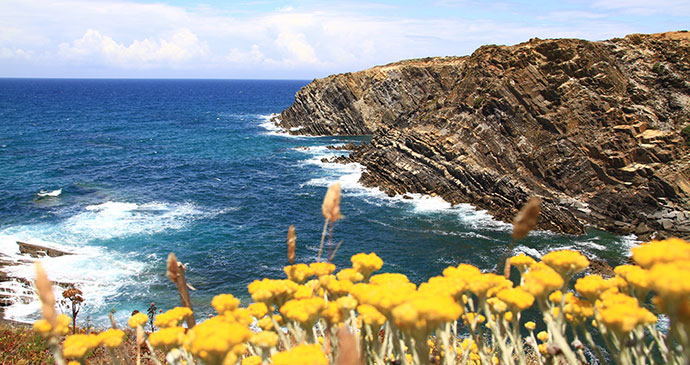 This is one of Europe’s most spectacular coastal paths running along deserted beaches, through meadows bursting with wild flowers, and cutting through a string of magical little villages along the way.

The Rota Vicentina is one of Europe’s most spectacular coastal paths, running along deserted beaches, craggy cliff tops and riverbanks, through meadows bursting with wild flowers, cork oak and pine forests and herb-scented maquis, and cutting through a string of magical little villages along the way. Almost all of the route lies within the Alentejano e Costa Vicentina Nature Reserve, a 200km-long chunk of protected shoreline.

The route takes in all of the Alentejo and western Algarve coast between Santiago do Cacém in the north and Cabo São Vicente (Cape St Vincent) – mainland Europe’s westernmost point – in the south. Within the Alentejo there are two possible starting points.

The most popular route is the 120km Fisherman’s Trail, which takes in the best stretches of the beautiful Alentejo coast and begins in Porto Côvo. From here the path hugs the coast south through Vila Nova de Milfontes, where you can take the ferry across the River Mira, south to Almograve and Zambujeira do Mar. The path continues along the shoreline from here to Odeceixe, after which it cuts inland, running parallel to the coast through the Algarve. Where the path is forced to cut inland there are circular loops around some of the prettiest coastal stretches. It eventually reaches Cabo São Vicente.

An alternative route, the 230km Historical Way, begins in Santiago do Cacém further north, running inland through the hills to Odemira, then crossing the River Mira and joining the Porto Côvo route at Odeceixe.