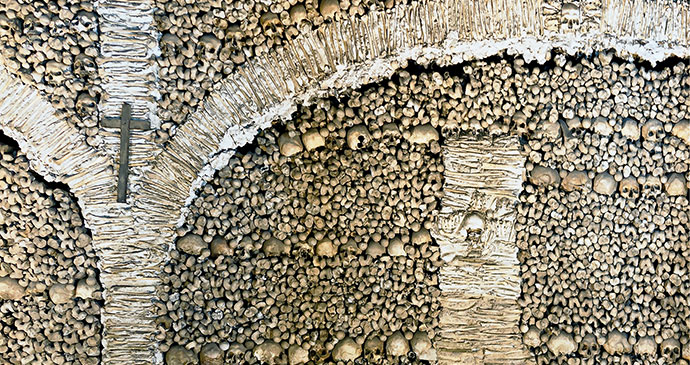 ‘We bones wait here for yours to join us’ reads the inscription over the chapel.

If the Carmelite Church focuses on the spiritual, then its Franciscan counterpart is grimly material, built in the 17th century when the Inquisition was at the height of its powers and punishments, and executions must have been a frequent occurrence in the nearby Praça do Giraldo. ‘We bones wait here for yours to join us’ reads the inscription over the chapel. Thousands are squeezed into the walls of the building, yellowing in the frowsty air. It’s hard to know what’s more horrible – the chapel itself or visions of it being built. One imagines the friars with a huge pile of remains in the middle of floor, arranging them neatly by size, fitting them into the gaps in the wall like pieces of a puzzle – a femur here, a tibia there, a small skull squeezed into the last small space between the top of a column and the ceiling. Popular mythology has it that the monks were trying to solve an overcrowding problem at the city’s monastic cemeteries and that the bones are all of the clergy. In reality the friars robbed graveyards throughout the city, exhuming the dead from the city’s cemeteries in a quest for morbid masonry. By the time they had finished their work the monks had consumed some 5,000 skeletons and were, it seems, so inured to death that they hung two desiccated corpses – one of them of a child – from the chapel walls for extra shock factor. A popular legend has it that they are the corpses of an adulterous husband and his son, cursed never to rot to bones by the betrayed wife on her deathbed.