There is so much to see in and around Butrint that anyone with more than a fleeting interest in history or archaeology could easily spend a whole day (or more) there.

The ancient city of Butrint, one of UNESCO’s World Heritage Sites, is far and away the most visited archaeological site in Albania, with visible remains spanning two-and-a-half millennia – from the first settlers in the late 6th or early 5th century BC to Ali Pasha Tepelena at the beginning of the 19th century AD.

Then the site became overgrown and half-forgotten, visited only by the occasional artist (including the British nonsense poet Edward Lear), until 1928, when the Italian Archaeological Mission, led until his death by Luigi Maria Ugolini, began to uncover the city’s hidden treasures. 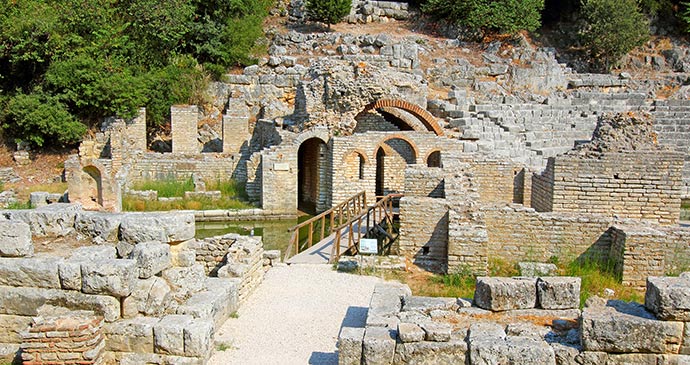 The sanctuary of Asclepius is a UNESCO World Heritage Archaeological Site © Pecold, Shutterstock

After World War II, Butrint was once again abandoned and forgotten until the Albanian Centre for Archaeology began excavating there in 1956. Archaeological research has continued at the site ever since.

Informative and well-presented panels guide the visitor through the city; the small museum, on what was once the acropolis, illustrates Butrint’s history through beautiful artefacts; further interesting sites lie across the Vivari Channel, which connects Lake Butrint with the sea, and can be visited on foot or by boat. There is so much to see in and around Butrint that anyone with more than a fleeting interest in history or archaeology could easily spend a whole day (or more) there. Anything less than 3 hours is likely to feel rather rushed and unsatisfactory.