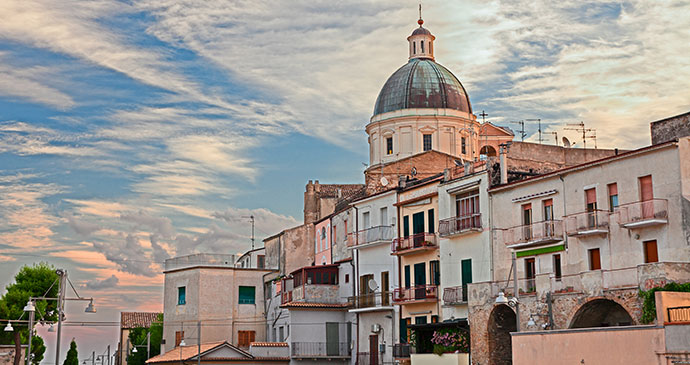 The picturesque town of Ortona © Ermess/Dreamstime

As I sit on my sun-drenched balcony overlooking Pescara and the Adriatic, I reflect on my connection to Abruzzo, a connection born out of two distinct and mutually exclusive parts of my being. The first, my Italian side, born and raised as a child in the very streets of this city and the hills of the surrounding countryside, possesses an indisputable natural connection to this land, its people, its culture. The second, the Australian part of me, raised as a teenager and flourishing as an adult in ’90s Melbourne, has gained a natural traveller’s curiosity and fascination for this place, one that is more often than not missing in the indifferent and complacent attitudes of locals to their own land. Whilst these two sides are distinct, they mesh to create a love for Abruzzo which can be viewed through two lenses: the subjectivity of my perception and pride as a local and, relative to the purposes of this book, the objectivity of an inquisitive traveller.

We’ve all read the stories of wine-tasting tours of Tuscany, the food experience in Rome or the romance of Venice. However, intrepid travellers are often surprised – though thrilled – to discover that there is an area of this popular country that has not been trodden and devoured by the travelling masses. From breathtaking, ancient hilltop towns, a little ragged around the edges, to Neolithic caves, Roman ruins, and the best beaches in the country, Abruzzo is as surprising and rare a find as an Egyptian tomb in a scoured desert.

There’s simply so much to do in Abruzzo. We owe part of the diversity of this region to the Gran Sasso d’Italia and the Majella, the two tallest mountain ranges in mainland Italy south of the Alps. In fact, almost two-thirds of the region is mountainous and provides for a stunning contrast to the rolling plains and 130km of pristine, Adriatic coastline. Today you can float, arms spread and ears below water, on the Adriatic Sea with endless views of blue sky and coastline; or take a drive inland and hike a trail on the slopes of the Majella mountain range. And tomorrow? Wine tasting along olive-strewn roads that disappear into the labyrinths of ancient towns Shopping along the sunny, pastel streets of Pescara? Or will it be skiing on the highest peaks of the central Apennines? Decide in the morning, piano, piano… con calma. That’s the way in Abruzzo.

In 2003, I began research on my family tree. I drove my uncle’s 1971 Fiat 500 from my family’s house in the medieval town of Abbateggio to Montesilvano Colle on a quest for documentation about my great-grandfather’s greatgrandfather, born in 1773. Pia, an elderly woman with all the clichés and contradictions of a traditional dress with a mobile phone tied to her belt, directed me to Don Francesco’s door, where I was greeted by a bespectacled man with a welcoming smile. He told me of the church attic in town, where I would find records from the 1400s to 1780.

The first inklings of the book were born in that attic, overlooking Abruzzo’s rolling hills, a landscape studded with medieval towns and Roman ruins. As I searched the records, I heard church bells tolling across the hills, and the sound went straight to my core. I realised people needed to know about Abruzzo – a region long overshadowed by its more ‘touristy’ neighbours, the likes of Tuscany and Umbria. I had grown up in a typical Abruzzese family, who fostered a love for the region – now I wanted to be the first to write a full, English-language guide to this beautiful place.

I spent many months researching the region, travelling through mountains, national parks and beaches, and charming ancient towns in the depths of Abruzzo. I already knew the place like the back of my hand, yet it was a daunting task. And then there was the shocking earthquake of April 2009. I was in Australia at the time, but I knew I had to return to see the ramifications for myself. Unfortunately, research revealed just how extensive the damage was: the outlook may have been somewhat optimistic following the earthquake, but it is clear now more than ever that rebuilding will take the better part of a decade. This is further compounded by the spate of recent earthquakes in Central Italy, as well as the tragedy at Rigopiano, where many lost their lives after an avalanche buried a hotel and ski resort.