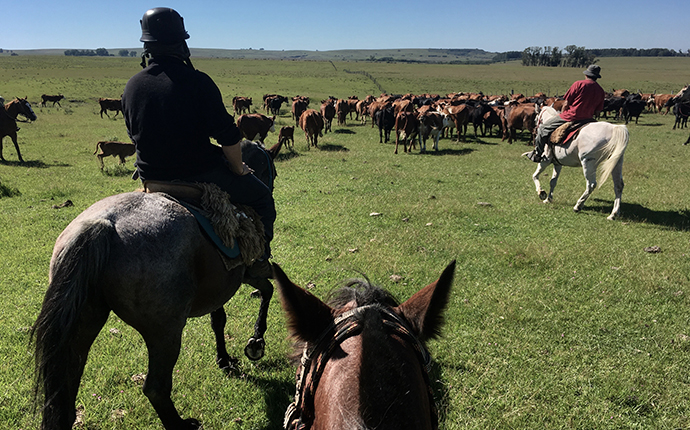 Uruguay is home to many tourist estancias © Julia Hammond

Founded in the 18th century, this delightful ranch is one of the best tourist estancias in the country.

A delightful, historic ranch 10km to the north, near the river. Founded in the mid 18th century, the house was a virtual fortress in the lawless 1820s. It was sold to Bernardino Rivadavia, who had been first President of Argentina but then went into exile, who built the current house (in 1830) but soon sold it. Now the house is surrounded by huge eucalypti full of cotorra nests, with views west as far as Fray Bentos. Near the river is gallery forest with algarrobo trees over 800 years old, and lots of birdlife (129 species in all).

The wonderfully hospitable Bruce family created one of the first tourist estancias in Uruguay, while also raising Hereford cattle and collecting tennis cups. There are two bedrooms in the main house with the kitchen and dining room, and six newer rooms in a converted barn, with fans but no air conditioning or television. It can seem like being sucked into an endless family holiday, with horseriding in the morning, followed by lunch and a siesta, then boating on the Río Negro, then perhaps sundowners on a sandbank and an asado. The Bruces are often in Montevideo these days, but on-site manager Gonzalo is equally charming, and with luck either he or Lucía will get out a guitar and teach you the gaucho version of Blue Moon. Waterskiing is available, and they offer two-day canoe trips from the Palmar Dam and four-day horseback trips for groups.