Colonia del Sacramento was founded in 1680 by Manuel Lobo, Governor of Rio de Janeiro, to be a Portuguese rival to Buenos Aires, directly across the River Plate. Fought over by Spain and Portugal for almost a century (changing hands seven times between 1680 and 1778), it was known as la manzana de la discordia (ie: the apple of discord which led to the Trojan War).

Today, there are many boutique hotels and chic restaurants in old Portuguese houses, and many houses are owned by Argentines. Tourism is the main industry, but there’s a nice sideline as a location for filming adverts and historical movies.

What to see in Colonia del Sacramento

In the walled old town (a UNESCO World Heritage district), the Plaza Mayor opens in front of you, a long square planted with palo borracho (‘drunken stick’, actually the silk floss tree), figs, palms, cycads, jasmine and bougainvillea, with cotorras and swifts flying about.

To the left, the Calle de los Suspiros is the most photographed street in Uruguay, a short traffic-free lane leading down towards the Plate that is essentially unchanged from the 18th century, with its cobbles and central drain, and single-storey cottages on either side. 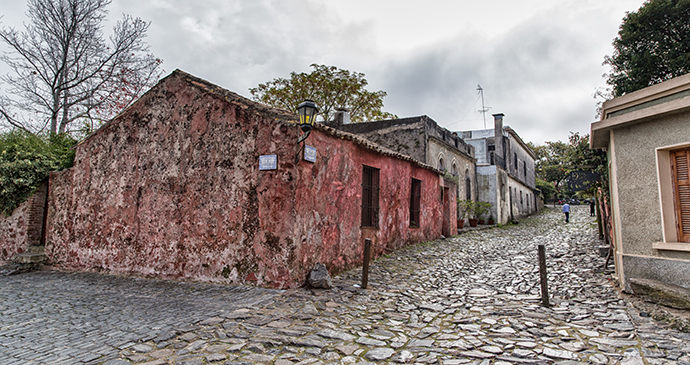 Just beyond this on the south side of the Plaza Mayor is the best of Colonia’s museums, the Museo Portugués, in an 18th-century Portuguese house, and at the western end of the plaza are other museums, the Casa Nacarello, the ruined Casa del Virrey and the Museo Municipal. To the left are the ruins of the convent of San Francisco Xavier, built in 1683 and burnt down in 1793; the faro (lighthouse) was built on its ruins in 1855–57. At 27m it’s higher than the Faro Punta Brava in Montevideo, but the stairs are better. You can just make out the towers of Buenos Aires on the horizon, to the left of the leftmost islet (with a navigation light on it).

The Basilica del Santísimo Sacramento (Basilica of the Holy Sacrament), is the oldest in Uruguay. It was rebuilt between 1836 and 1842 and restored between 1957 and 1995 although, with its plain white exterior and interior, it’s not especially attractive.

On the south side of the church is the Plaza Manuel Lobo, an attractive park at the heart of what was the Portuguese fort. The Casa del Gobernador (Governor’s House), ruined by the Spanish in 1777, was excavated in 1990–93 (some of the finds are on display in the Archivo Regional) and the foundations have been restored, with walkways through and over them and interpretative signs (in Spanish only).

At the north end of Ceballos by the harbour, the Bastión del Carmen, built in 1722–48, marked the northern end of the city wall. It was demolished in 1859 but its foundations are still visible near the 38m-high chimney of a soap factory, built in 1880, that went bankrupt when its owners lost a lawsuit with an Argentine company. Now it houses the Teatro y Centro Cultural Bastión del Carmen, with an attractive waterside garden and sculpture.

Getting to Colonia del Sacramento

The bus terminal (Avda Roosevelt & Manuel Lobo) is immediately north of the port, just east of the old town. Buses to Montevideo (with COT and Turil) are frequent enough that if you arrive from Buenos Aires and go to the terminal in the morning, you’ll have no problem booking a bus for the afternoon; there’s no need to call ahead from Argentina.

Many of these buses connect to Rosario and Nueva Helvecia, and Compañía Omnibus Colonia also runs frequent local buses there and elsewhere. Nossar goes to Trinidad and Durazno (3 daily), Berrutti to Carmelo and Nuevo Palmira, a couple continuing to Mercedes, and Chadre (Grupo Agencia) all the way up the litoral route to Mercedes, Fray Bentos, Paysandú, Salto and Bella Unión.

From Montevideo, Ruta 1 is dual carriageway just short of Colonia, then you’ll pass the so-called international airport (used by private planes from Argentina) and cross the river into Colonia, 177km from Montevideo.

The ferry terminal offers ATMs, toilets and a basic snack bar. There are tourist information offices by the exit for cars (east of the bus terminal) and by the pedestrian exit (to the west at Calle Méndez). The ferry companies all have ticket offices at the port: Buquebus, Colonia Express and Seacat Colonia.