Plentiful monkeys and birds, plus a superb location overlooking Brokopondo Reservoir, make this a very popular and worthwhile day trip from Paramaribo. 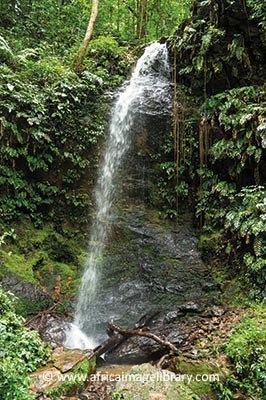 About 100km inland from Paramaribo as the crow flies, and readily accessible by road, the scenic and wildlife-rich Brownsberg Nature Park is one of the most popular destinations for organised day trips from the capital. Created in 1969, the 112km2 park protects the forested slopes of Brownsberg (‘Brown’s Mountain’), which rises to an altitude of 560m immediately east of the Brokopondo Reservoir. Around 1,500 types of plant have been recorded in the park, as have 410 bird species. It is also one of the most reliable sites in Suriname for seeing large mammals, with red howler and black spider monkey both common in the vicinity of the camp, along with several smaller monkey species and the twitchy little agouti. The mountain, like nearby Brownsweg, is named after John Brown, who worked the slopes in the late 19th century (some of his diggings can be seen along the footpaths close to camp). Ironically, illegal gold mining is today probably the biggest threat to the park’s wildlife. In 2012, the WWF discovered 50 illegal gold-mining sites in the vicinity of the park, which aside from contributing to local deforestation, can result in increased subsistence hunting for bush meat and also mercury contamination of the soil and water. The park receives an estimated 18,000 visitors annually, a high proportion of which are local weekenders from Paramaribo, so it tends to be quietest on weekdays.