Yaguarón is home to the most beautiful church in the country, and the only complete one from the Reductions.

Yaguarón is famous for being the only Reduction to have its original church still standing in its original form. This is a ‘must-see’ if you are interested in the Reductions, and although the Reduction is Franciscan, the church is on exactly the same model as in the Jesuit Reductions. If you are not in your own transport, you see it out of the window of the bus as you go through the town, travelling towards Asunción. (Travelling southwards, however, the one-way system does not lead you past it.) 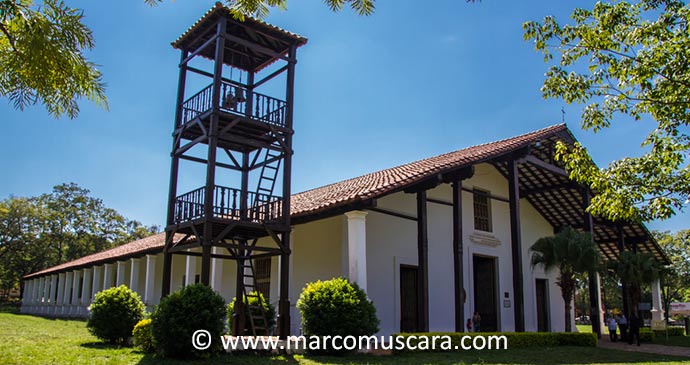 It is highly distinctive with its simple pitched roof, massive wooden columns and separate wooden bell tower, and is clearly visible on the north side of the Ruta, which curves around it. But if you can manage to stop and go inside, do not miss the opportunity to see this gloriously harmonious extravaganza of painted and carved wood.

Fray Luis Bolaños and Fray Alonso de San Buenaventura, his missionary companion, founded Yaguarón shortly after Itá, around 1586–87,although an indigenous settlement existed there already, apparently founded by the conquistador Domingo Martínez de Irala in 1539. Today, Yaguarón still has an interesting band, called Peteke Peteke, that plays traditional, indigenous music on old instruments such as the turú (cow’s horn) and different sizes and shapes of drums. It traditionally plays on 3 February (feast of San Blas), 16 August (feast of San Roque) and the first Sunday of September.

There are two theories of the derivation of the town’s name. Either it comes from the Guaraní jaguar (father of a dog), indicating that a huge and fearsome dog used to menace the place, or from the name of a respected cacique (chief), Ñaguaru.