When you arrive in Caazapá, you may gasp in delight at finding such an attractive town so deeply hidden in the countryside. 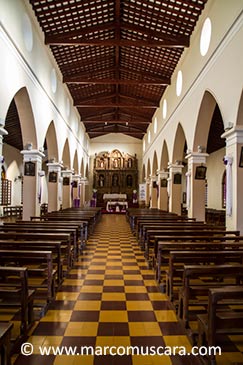 Caazapá is one of the earliest and most important of the former Franciscan Reductions, and was founded by Friar Luis Bolaños himself in 1607 (two years before the Jesuits founded their first Reduction at San Ignacio Guazú). When you arrive in Caazapá, you may gasp in delight at finding such an attractive town so deeply hidden in the countryside. At the initial little roundabout you are welcomed by a statue of Luis Bolaños, simply attired in his Franciscan habit and carrying a cross and a staff.

From here a splendid avenue of palm trees leads to the plaza and the church, with its stunning reredos. To the right is the cemetery where there is a smaller and older chapel, also with an original reredos. To the left the road leads on to the famous spring, Ykuá Bolaños – a name unfortunately now linked in everyone’s mind with the tragic fire at the Ycuá Bolaños supermarket in Asunción in 2004, when 400 people died.

(Photo: Caazapá’s San Pablo is an elegant church and is rendered all the more enchanting by the birdsong inside © Marco Muscarà)

There are still very poor areas in the countryside around the town, but a number of better-off politicians, lawyers and businessmen have property in the area, with the result that Caazapá appears a surprisingly well-kept and well-off town. It was well off even as a Reduction, because of its excellent cotton and tobacco production, and the decoration of the church was as fine as those of the Jesuits, while the quantity of gold exceeded the Jesuit churches. (This is reported by Félix de Azara, the Spanish naturalist and military officer who was sent in 1781 to determine the border dispute between the Spanish and Portuguese colonies.)