In the heart of the Rupununi wetlands on two of Guyana’s most diverse rivers, surrounded by pristine rainforest, Rewa is a great destination for ecotourists looking to get off Guyana’s beaten path. 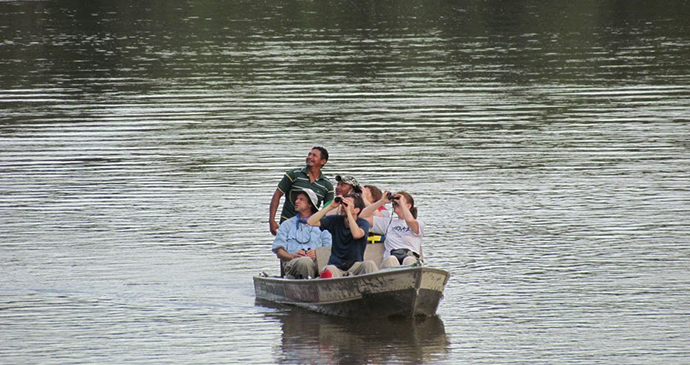 Located at the confluence of the Rewa and Rupununi rivers, Rewa village is a small community of roughly 250 inhabitants. It’s more isolated than other tourism destinations in the north – it’s accessed by a 2- to 5-hour boat ride depending on water levels) or 2½-hour bum-jarring motorcycle ride – but it also has one of the most beautiful settings and equals Surama for a destination for adventurous tourists. The area offers visitors one of the greatest chances of seeing many of Guyana’s great mammals, including jaguar, ocelot, tapir, capybara, brocket deer, giant armadillo, peccaries and seven different monkey species. In the rivers there are healthy populations of giant river otters, black and spectacled caiman and giant river turtles. The primary forest that lines the Rewa’s banks also provides for good birdwatching. Sightings of scarlet macaws, tiger herons, bat falcons, kingfishers, great black hawks and several species of parrots and cotingas are common. Harpy eagles are also sometimes seen flying overhead.

Fish life in the rivers is also rich. Peacock bass, pacu, piranha, payara and several large species of catfish can be caught with relative ease. In the ox-bow lakes and ponds, of which there are many along the Rewa, there is a relatively healthy population of arapaima, the world’s largest scaled freshwater fish. Besides attracting tourists to the area, the rich biodiversity of the Rewa River has long attracted researchers and organisations intent on helping the village to conserve its natural surroundings. There are currently a couple of conservation projects revolving around giant river turtles and arapaima. Villagers are learning to fish, hunt and log in a sustainable manner. Through ecotourism they see the value in keeping many of their species alive.

Unfortunately the rich diversity of the area is also attracting the attention of companies who seek to make money in different avenues. Oil exploration is ongoing not far from Rewa village and timber concessions are being granted in the surrounding forests. It’s another case of conflicting progress, but for now Rewa, the surrounding wetlands and the forested rivers remain pristine locations for tourism.