Kaieteur Falls has been recognised as the crown jewel of Guyana’s vast ecosystem. 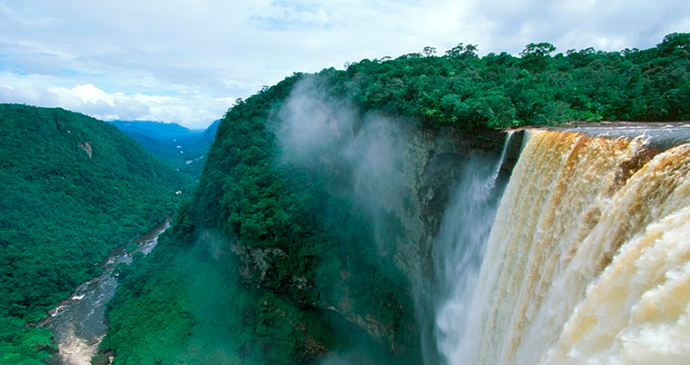 Within Kaieteur National Park is Guyana’s most celebrated, and highly touted, natural wonder: Kaieteur Falls. Since it was discovered in 1870 by the European explorer, Barrington Browne, Kaieteur Falls has been recognised as the crown jewel of Guyana’s vast ecosystem. During its peak, some 30,000 gallons of water cascade over a 741ft-sheer drop, making Kaieteur Falls one of the world’s largest and most powerful single-drop waterfalls (the falls measure 822ft to the bottom of the gorge; five-times the size of Niagara Falls). In 1929, the British Colonial Administration designated 45 square miles surrounding the falls as a National Park. It was a groundbreaking step for conservation, as it was one of the first such acts in Latin America and the Caribbean. In the 1970s, all glory was lost when the park was downsized to allow for expanded mining concessions in the area. Two decades later, in what must surely have been an embarrassing moment of retrospection for those involved, the boundaries of the park were expanded again to protect it from the damaging mining practices. The good news is that Kaieteur Park now consists of 224 square miles (580km²) of protected lands; unfortunately it remains Guyana’s only national park.

Legend has it that the waterfall draws its name from a selfless Patamona Amerindian chief named Kai. In an effort to appease the Great Spirit Makonaima, Kai sacrificed himself to save his tribe from the vengeful Caribs. Appeasing gods takes bold acts and Kai outdid himself by paddling over the point where the Potaro River tumbles into the gorge below. If nothing else, he succeeded in getting a natural wonder named after him (teur means ‘falls’ in a local dialect).

The beauty of Kaieteur Falls lies in its sheer size and power – during the rainy season, watching 30,000 gallons of water per second flow over the nearly 400ft-wide edge is a stunning sight and sound – but also in its raw state. The isolated location of the falls has kept much development at bay. There are no guard rails, let alone kitschy tourist shops (or any tourists really). Nature, by and large, is left undisturbed and the place surely looks remarkably similar to the day it was ‘discovered’ by Mr Brown.