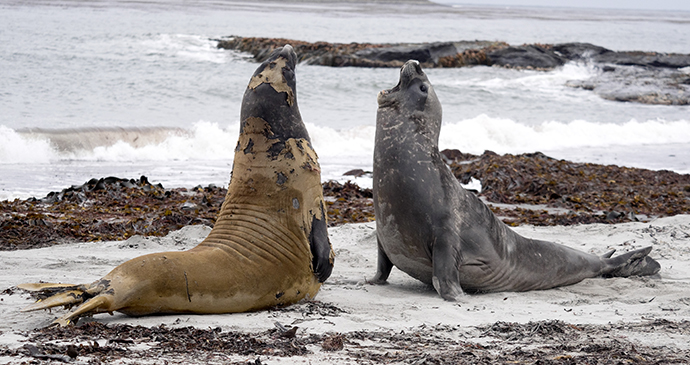 This island has the most accessible breeding colonies of southern sea lions and southern elephant seals © Vladislav T, Shutterstock

Sit outside at dusk listening to magellanic penguins calling, while yards away elephant seals are hauled up on the beach.

Sea Lion Island, one of the smallest islands in Falkland, is one of the most popular destinations for visitors. Lying ten miles (17km) from East Falkland, this island forms a plateau rising to approximately 100ft. It is five miles long and just over one mile at its widest point. From Bull Hill, at the western end, the island slopes gently down eastwards to the open sandy beaches. There are a number of pools on the island. The tussac grass extends around some of the coast away from the cliffs, while inland the habitat is short-cropped turf. This island has the most accessible breeding colonies of southern sea lions and southern elephant seals. It also has one of the highest densities of breeding birds on the islands. It is one of the best places to see one of the most endangered birds of prey in the world, the striated caracara, locally known as the Johnny Rook. There are also many small birds on the island in the absence of any ground predators. In early and late summer there is the chance of seeing killer whales close inshore. The island was recognised as a National Nature Reserve in 2011 and is also a RAMSAR site – a wildlife-rich area designated in the Convention on Wetlands treaty; named after the first of these sites, Ramsar in Iran – due to the high numbers of waterfowl found here. The sheer abundance of wildlife in such a small area makes Sea Lion Island a must on even the shortest of trips to the Falklands, but especially for those interested in photography: many of the published photographs of Falklands’ wildlife have been taken on Sea Lion Island.

The small, nearby offshore tussac islands of Brandy, Whisky and Sea Lion Easterly are uninhabited and are owned by the Antarctic Research Trust.