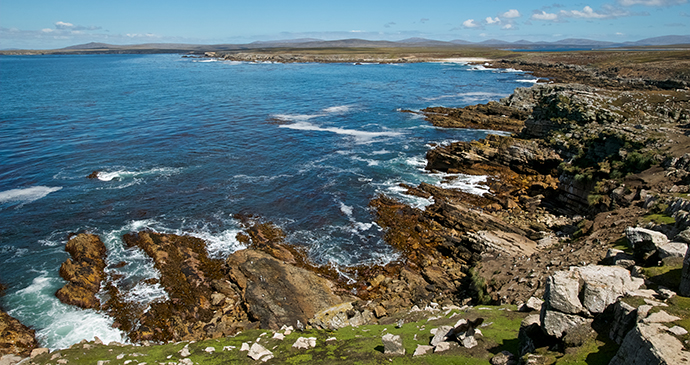 From open pools often teeming with waterfowl to rocky cliffs where you’ll find noisy rockhopper penguin colonies, this large island has it all.

Comprising 22,000 acres, Pebble Island is the third-largest offshore island in the Falklands and is situated to the north of West Falkland. This farm is some 24 miles long and about six miles at its widest point. The landscape varies greatly, from large ponds and moorland, to long sandy beaches and high cliffs. The majority of the wetlands are on the eastern part of the island and the three major hills, First Mountain, Middle Peak and Marble Mountain, at the western end. The island gets its name from the semi-precious stones which are found along the coast. These pebbles are mostly translucent or semi-translucent and are made of quartz, an agate. When held up to the light, these pebbles let varying amounts of light through. Opaque stones of varying colours can also be found on the island. For the naturalist, Pebble Island is a superb place to watch the greatest concentrations of wildfowl and wading birds on the Falklands. It also has four species of breeding penguin most summers: rockhopper, gentoo, magellanic and macaroni. In addition, king penguins have been occasionally observed here, and the very rare erect-crested penguin was seen here in the late 1990s.