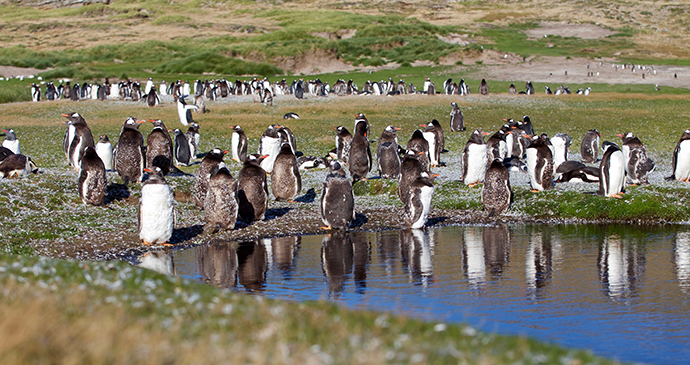 This island is best known as the home of one of the world’s most spectacular seabird colonies © Grant Tiffen, Shutterstock

Generally only accessible to cruise ships, the mix of penguins, albatross and superb scenery makes a visit here very memorable.

New Island has often been described as one of the most scenic of the Falkland Islands. It is located over 150 miles from Stanley; its nearest neighbour is Beaver Island, three miles to the south. New Island is about eight miles (13km) long and half a mile (800m) at its narrowest point.

The highly indented coastline runs for 52 miles in total. The cliffs on the western side of the island rise to 600ft (183m), whereas the eastern shores gently slope into the sea. There are several bays on the eastern side, one of which, Settlement Harbour, once known as Hookers Harbour, is the site of the small jetty where the island’s goods are unloaded. The large bay to the south, South Harbour, was the site of the whaling station established in 1908. The highest point on the island is South Hill at 743ft (226m). This island is best known as the home of one of the world’s most spectacular seabird colonies, which accommodates large numbers of black-browed albatrosses (29,000 pairs), and rockhopper penguins (13,000 pairs). It is a popular destination for the many tourists who come ashore from passing cruise ships, attracted by the birds and the most photogenic scenery. The owners, New Island Conservation Trust, are reliant on cruise-ship passengers to fund their work, and are looking to provide accommodation in the future for overseas visitors wishing to stay on the island, but it is presently only open to Falklands’ residents.