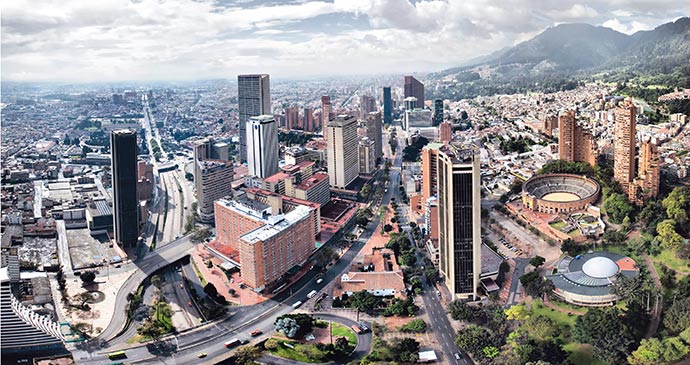 Today the people of Bogotá love and respect their city – it is now oh-so chévere (cool) to be Bogotano, a far cry from the sentiment of a decade ago when it was a place that was truly loathed.

Once a byword for danger, the city of Bogotá has undergone a significant clean-up act in recent years, following a passionate campaign aimed at nurturing societal change. Visionary leaderships have ignited fresh fire into the belly of Bogotá’s eight million inhabitants via a host of pioneering strategies that have helped change the mindset and behaviours of a once unruly urban sprawl. Today, Bogotá is a cosmopolitan city on the up, a metropolis that bears the signs of modern self-improvement.

Sleek skyscrapers and a futuristic transit system are symbols of an (almost) transformed city that boasts 4,594 public parks. Thousands of cyclists of all ages criss-cross Bogotá’s wide, green expanses on Latin America’s largest bikepath network. Car use is restricted to lessen congestion. Vehicles no longer park on sidewalks and basic traffic laws such as stopping at a red light, giving priority to pedestrians, and buses stopping only at bus stops are largely obeyed (except perhaps by busetas). Citizenship is no longer a laughable concept in the city and today the mood is one of highly charged optimism. Designer stores, swanky cafés, lounge bars and fine restaurants are testament to Bogotá’s ambition to become one of the most desirable cities on the radar. Sunday in the city is a family day when the streets take on a party atmosphere of clowns, music and picnics in the parks. Food vendors, churchgoers and mothers with pushchairs converge on the plazas and compete for space with armies of pigeons. Jugglers take centre stage on empty roundabouts while old women on flower stalls sit amongst a fragrant kaleidoscope of varicoloured blooms. Paths are freshly swept and roads free of rubbish in a place where choking smog once dominated the cityscape. Today the people of Bogotá love and respect their city – it is now oh-so chévere (cool) to be Bogotano, a far cry from the sentiment of a decade ago when it was a place that was truly loathed.

Yet modern-day Bogotá still has its many problems, some of which are born out of a rapidly expanding refugee population displaced from Colombia’s rural provinces. Constant streams of migrants arrive in the capital full of high hopes, only to find the city’s streets aren’t paved with gold. Most of these poor peasants end up in the makeshift shanty towns that sprawl along Bogotá’s fast-decaying southern nub. Conditions are nothing short of horrendous with sanitation and fresh water scarce. Piles of rotting rubbish are scavenged for a glimmer of hope in sewageswamped streets that are as lawless as they are vile. Pickpockets plague the shopping malls and all sorts of evils roam the streets after dark yet, despite this, Colombia’s ‘first city’ refuses to be in the doldrums. Bogotanos are largely a morally responsive, socially conscious and fashionably introspective bunch – so the mood within vast swathes of the city is upbeat. Big hotels are also expressing confidence in Bogotá’s promising future – that Hilton returned to open a swanky US$27 million hotel in 2009 and Hyatt pledged US$100 million in 2010 is a clear show of faith. However, the vast disparities that exist between the affluent north and poverty-stricken south are nothing short of shocking – two very different faces of Bogotá, wrapped around the bubblegum-coloured colonial core of the old quarter of the city.