The end, or beginning, of the Carretera Austral, sandwiched between lakes, glaciers and mountains, the border crossing to El Chaltén in Argentina is one of the lesser-known and yet most iconic crossings on the continent.

The picturesque region around Villa O’Higgins is rugged – dominated as it is by dramatic rivers and glaciers, but it is also relatively inaccessible. As such, despite the ample trekking options in this area, most visitors spend their time here planning their onward journey north or south. Villa O’Higgins is the last border crossing into Argentina along the Carretera Austral, for those without a vehicle. The border crossing is only open in the summer (1 November–30 April) and can only be used by pedestrians and cyclists. Information relating to this crossing is scarce and many believe it’s not actually possible to get into Argentina from here. For those with patience and budget available, it is possible to take a short but spectacular flight over the ice field here, but the weather is volatile and the prices are punchy.

What to see and do in Villa O’Higgins

Within Villa O’Higgins there are relatively few highlights. Besides some basic shopping in small stores, or visiting the museum, most activities are outside the village. Fly-fishing and birdwatching are popular activities, possible both with and without a guide. Trekking options relatively close to the town include to the Mirador Cerro Santiago, just 30 minutes (1km) from Villa O’Higgins on a well-marked trail, which overlooks the village, the native bush and the mountains in the background. The trail continues for another 40 minutes to a second viewpoint with stunning views of the surrounding mountains, rivers, lakes, bush and glaciers.

The Padre Ronchi Museum is a small, quaint museum located in a restored chapel that was originally built under Father Ronchi’s supervision in 1977. Most of the exhibits have signs in Spanish about the history of Father Ronchi and the early settlers around Villa O’Higgins. His bedroom with some artefacts is at the back. The museum is, however, of limited interest to those not yet familiar with the history of Ronchi and his legendary status in the Aysén region.

This is a pleasant, scenic detour for those with a high-clearance vehicle, beginning 6km north of Villa O’Higgins and passing a number of glaciers en route to the lake. A gravel road of 45km leads to the Argentine border at Río Mayer and on to Lago Christie. The road passes a small chapel built by Father Ronchi and still lovingly maintained. It incorporates an unusual roof-construction called canogas – interlocking hollowed-out tree trunks. 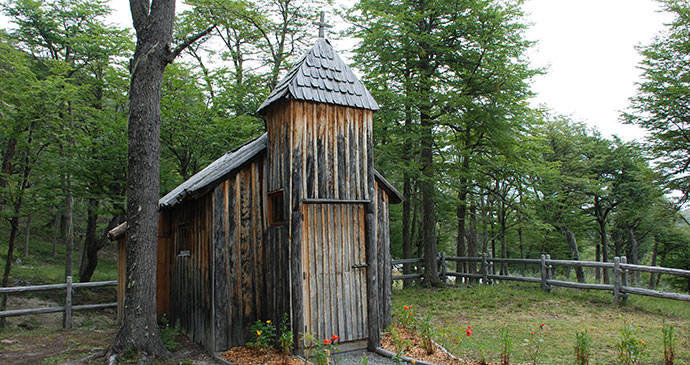 The road continues to the Chilean border post where it is theoretically possible to cross into Argentina using the Paso Río Mayer. However, there is no vehicular bridge across the river on the Argentine side. Occasionally it might be possible to cross in a high-clearance 4×4 when the river is very low, ie: in winter. This section involves multiple river crossings. From the Chilean border control it is only 5km, as the condor flies, to Ruta 81 and the Argentine border control, a further 53km to the junction with the Ruta 35, and then 50km to the Ruta 40 at the Las Horquetas junction.

Ventisquero O’Higgins can be seen either by boat or a several-day trek from Candelario Mancilla. Travellers are rewarded with a magnificent, up-close view of one of Patagonia’s largest glaciers. Upon approach, the boat passes floating icebergs, and the tongue of the glacier spills off the Southern Ice Field into the lake. The 100m-high jagged walls protrude out of the lake and the sounds of the ‘calving’ glacier resonate like thunder. The front face is about 3km wide, making it one of the biggest accessible glaciers in Patagonia. Lago O’Higgins reaches depths of 836m (the deepest point is close to the glacier), making it the deepest lake in the Americas.

Until 2020 the O’Higgins glacier was easily visited by taking the Robinson Crusoe boat and could be combined with going to/from Candelario Mancilla. Alas Robinson Crusoe was an early casualty of the pandemic, arguably not helped by local competitors with smaller boats. The boat was sold first, and now operates in Tierra del Fuego. The Robinson Crusoe tour operator closed, and the hotel was eventually sold, and continues to operate as Rumbo Sur Deep Patagonia Lodge. The glacier is now only possible to visit via an expensive charter boat and only when weather permits. Currently two boats serve the route between Villa O’Higgins and Candelario Mancilla – it remains to be seen whether there is sufficient demand post-pandemic to offer a scheduled detour to the glacier.

Aerocord flies twice a week from Coyhaique. Although this is a spectacular flight and subsidised by the state, priority goes to local residents and the flight is invariably full. In peak season it is nearly impossible for non-residents to get a seat on the nine-seater plane. The only means to buy a ticket is by visiting or calling their Coyhaique office.

Buses Isabel offer a route to Caleta Tortel. Make sure to buy this ticket as soon as possible from the office, as no reservations over the phone are taken, and in high season the bus fills up quickly. Buses Gardy offer buses from Cochrane to Villa O’Higgins. Tickets can be bought (and the bus leaves) from the office of Aires del Sur. Up-to-date bus timetables can usually be found in the window of the tourist information office.