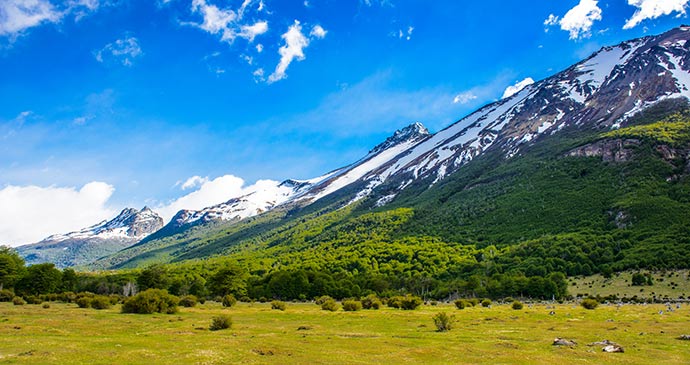 Created in 1960 to protect the 63,000ha of the southern tip of the Andes, the sub-Antarctic false beech forests, and the southernmost reach of the Magellanic biogeographical zone, this park holds the distinction of being the southernmost national park in the world. Lenga and the evergreen coihue are the dominant tree species of the cool and damp Magellanic forests. The park encompasses the area from north of Lake Fagnano to the coast of the Beagle Channel, along the border with Chile. Eras of glaciation have etched the landscape with mountain chains and deep valleys. Winds off the sea and the Andes keep the temperatures moderate and rarely below freezing in winter, but rarely above 10°C.

The mean precipitation is 700mm per year with no real peak period other than a slight rise in August, and winter snowfall is abundant in the mountains. Peat bogs are common in Tierra del Fuego, occurring when accumulations of dead plant matter such as sphagnum moss and aquatic grasses build up in damp valleys where low temperatures and slow-moving acidic waters prevent decomposition. After several centuries the weight of the upper layers forces oxygen out of the compressed lower layers that thereby form peat. Tierra del Fuego has very limited animal diversity, with only 20 species of mammals and 90 of birds. There are no amphibians. What wildlife there is though is abundant and several species are unique; the Fuegian red fox (Dusicyon culpaeus lycoides) is the best example.

The world’s most southerly national park is home to intense landscapes and unique species.

Introduced species take their toll on the island. Most loved and hated is the beaver (Castor canadensis). It has become an attraction with tourists and there are tours specifically to see the beavers’ dams, but they are a menace to the natural ecology and especially the riparian systems. These animals along with rabbits, muskrats and the mainland grey fox were all introduced for supposedly economic reasons for their pelts. There are also rats and other rodents that made their way onto the island from ships, as well as insects and plant species introduced by tourists. Island ecology is fragile, however, and after centuries of a unique evolution based on isolation from mainland species, it cannot quickly adapt to invaders. These introduced species have altered the natural landscape and ecological balance.

Along the coastal shores wildlife is ever-present, whether it be one of the sheldgeese (upland, kelp or ashy headed) or cormorants (you may be fortunate to see the the imperial cormorant up close and glimpse its stunning blue eyes) or any of the numerous coastal birds such as the oystercatcher or the entertaining flightless steamer ducks, churning their legs ferociously to carry them along the water. There are also particular coastal plants such as the sea pink (Armeria spp.). Crustaceans and shellfish are abundant and important economically.

The presence of several tribal groups on the island before the arrival of Europeans goes back some 10,000 years. Ancient middens exist on the beaches of the Beagle Channel and Lago Roca where remains of shells and bones tell of the diet of these peoples. They stayed near the shorelines and used canoes made of the bark of lenga trees for hunting sea lions, collecting molluscs and transporting themselves throughout the area. They were completely integrated into this seemingly hostile environment and clothed themselves in little more than a sea lion pelt; for the most part they were comfortable naked and simply applied the fats and greases from the animals to their skin to repel water.