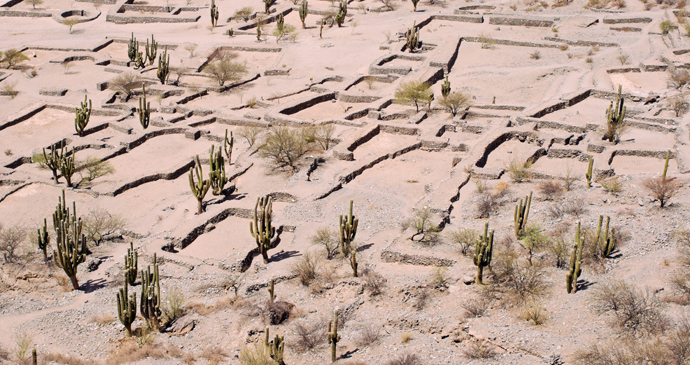 The Ruinas de Quilmes or Diaguita ruins are the remains of the Quilmes peoples’ large urban centre that housed up to 5,000 individuals © Alfredo Cerra, Shutterstock

This tiny town offers innumerable attractions for tourists. Avenida Perón is a haven for souvenir shopping (Tafí is a major stop on the signposted tourist trail the Ruta del Artesano), and sampling the area’s excellent farmhouse cheeses, some seasoned with red peppers. The surrounding countryside is stunning and beckons you to come hiking, mountain biking, horseriding or exploring archaeological ruins. Called Taktillaktu in the Calchaquí language, it derives from the native word taktillakta meaning ‘a village with a splendid gate’.

The town is halfway to Cafayate from Tucumán on Ruta Provincial 307, which takes a winding and precipitous route; atop one of the passes is a sculpture of the Tafí Indian and the condor representing the strength of nature. There are daily connections to Tucumán (two–three hours, approximately eight daily on an erratic schedule, six on Sunday, 29 pesos) or north to Cafayate and Salta with Aconquija, which also serves Amaicha del Valle, Quilmes, Colalao and Cafayate.

The Quilmes people were a warlike tribe dating back to at least AD1000; they resisted the Incas and endured 130 years of Spanish colonisation. The Ruinas de Quilmes or Diaguita ruins, 5km west of Ruta 40 an hour (46km) south of Cafayate, are the remains of their large urban centre that housed up to 5,000 people. The labyrinthine complex (open: 08.00–19.00 daily; admission 10 pesos) rises up a hillside, which you can climb to the top of, where once only their chief resided.

From here you have a view of the entire valley and the impressive stone wall that reaches out of sight to either end of the complex. For details, contact Sebastián Pastrana (mobile: 0381 15 443 6805). The Quilmes culture was destroyed in 1667, when the Spaniards expelled them from their territory and forced them to walk 1,500km across the desert to Buenos Aires, a destination which none of them reached (although a renowned brewery and a suburb are named after them). It may come as a surprise to learn that the ruins of Quilmes, one of the great archaeological and cultural treasures of the province and the country, were privately owned by the late Hectór Eduardo Cruz, an architect and weaver of traditional textiles.

There is a small museum of sorts but the main function of the building is to sell imitation souvenirs and other regional gifts. There are no interpretative materials in English except for books and brochures that you can purchase. Give yourself a couple of hours to explore the ruins – wear proper sun protection and carry water. The restaurant is very nice, although a bit overpriced, and comfortably cool to escape the intense heat of the sun. Accommodation is available at the Parador Ruinas de Quilmes (tel: 03892 421075, 421004; email: complejopachamama@cosama.com.ar).