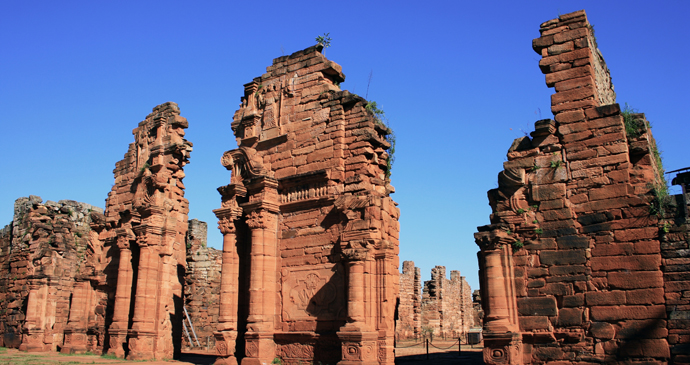 This pleasant small town is an hour by bus from Posadas (63km east on Ruta 12), and home of one of the most important ruined missions. San Ignacio is a large archaeological site where between 1609 and 1818, the Jesuits established one of the most significant and unique social, cultural and religious centres of South American history. Three other missions are in the area: Santa Ana, Nuestra Señora de Loreto and Santa María La Mayor. San Ignacio is also a good base to explore the surrounding countryside, villages and riverscape, and that rarity for most of northern Argentina: hills.

The Interpretive Centre Ruinas de San Ignacio, near the entrance to the ruins (tel: 470186; open: 07.00–19.00 daily), has displays and installations interpreting the culture and mission lifestyle. There is a very good state-of-the-art 3D sound and light show amid the ruins, a very atmospheric experience on a summer evening. It starts at 19.30 every day, lasts an hour and costs 30 pesos. A ticket covering all four missions costs 30 pesos and lasts for 15 days. San Ignacio’s is very impressive and you can spend a few hours wandering round; there are good multi-lingual information lecterns scattered around. Cheap local buses (30–45 minutes, 3–4 pesos) run hourly to Santa Ana and Loreto, or a taxi will charge around 100 pesos to take you to both, including waiting time. The tourist  information office on Sarmiento and Rivadavia can give you detailed schedules. Santa María, a couple of hours away, requires a full-day excursion. If you’re keen on exploring all the missions, it’s most convenient if you have your own car.

The Jesuits were expelled from the area in 1767, and the missions themselves raided and destroyed by Portuguese and Paraguayan invasions between 1816 and 1819. A remarkable civilisation that had prospered for a couple of hundred years was thus destroyed in three.

San Ignacio Miní was founded in 1610, and moved to the present site in 1695, growing to a population of 3,300; it remains the best preserved of all the missions, with a central square, church, priest’s house, cemetery and over 200 dwellings still in a fair state. The church, 74m long, was an outstanding example of the ‘Guaraní Baroque’ style, with floral bas-reliefs carved into the red sandstone. By the time of their destruction and extinction, the greater mission comprised 30 towns within Brazil, Paraguay and Argentina. Half of these were in Argentina, with 11 in the territory of Misiones. The Jesuits were expelled from the area in 1767, and the missions themselves raided and destroyed by Portuguese and Paraguayan invasions between 1816 and 1819. A remarkable civilisation that had prospered for a couple of hundred years was thus destroyed in three.

The social organisation and economic structure are considered unprecedented in the world. The missions’ structure and stability empowered them to deal with sanitary issues and avoid devastation from plagues, to deter military attack and to maintain a completely self-sustaining agricultural economy with advanced skills and trades that provided a high quality of life for all who lived there. For these reasons San Ignacio Miní reached a population of 28,714 inhabitants after its first hundred years. By 1732, the population had reached 141,182. This seeming utopia caused discomfort to the political powers colonising the surrounding countries, and is the reason for the expulsions and attacks. The missions, lost in the jungle, were rediscovered in 1897, but restoration did not begin until the 1940s; in 1984, the best were placed on UNESCO’s World Heritage List.

Nuestra Señora de Loreto was founded in 1632 and moved in 1686 to the present site, 3km off Ruta 12 about 10km back towards Posadas; although now in a particularly bad state, it is also on the World Heritage List. Santa Ana is 40km from Posadas along Ruta 12 (and 700m from the highway) in the Sierra del Tapé; it was first founded in 1633, but because of attacks by bandits it was abandoned and then re-established in 1660. The church, cemetery, dwellings and workshops can still be seen. Santa María La Mayor, founded in 1636, is 150km from Posadas on Ruta Provincial 2, between San Javier and Concepción de la Sierra; the walls of the priests’ dwelling, school and workshops can still be seen.