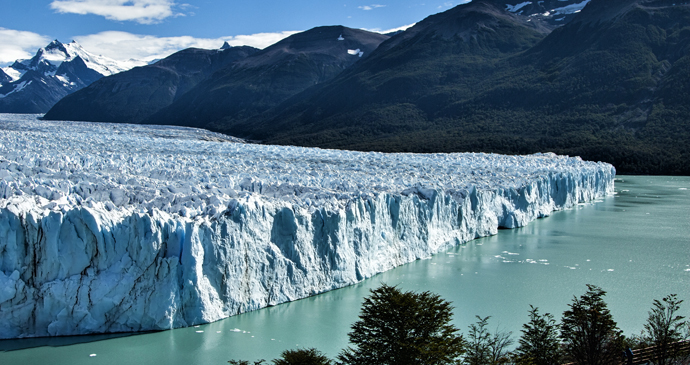 This park is made famous by the 35km-long, 5km-wide and 60m-high Perito Moreno Glacier, probably the first thing that comes to mind when thinking of the national parks of Argentina. Even larger is the Upsala Glacier, 60km long and 50m high. In the park’s northern sector, Mount FitzRoy challenges mountain climbers from around the world to reach its 3,375m summit. A few thousand years ago the entire area of the park was covered by glaciers, and the still-enormous icefields that remain (2,600km² of icefields from which 47 major glaciers descend) and the huge glaciated valleys and moraines suggest the intensity of such an ice age.

With the current concern over the melting of the planet’s glaciers, the icefields in this national park will strike you as even more poignant.

When the climate warmed, the glaciers began melting and retreating to their current strongholds on the mountains. This retreat continues as the climate warms, indeed at an accelerating pace. The area receives about 8m of precipitation per year, more than the Amazon rainforest, but in the form of snow. The Perito Moreno Glacier moves at a rate of 1.5–2m per day; however, the front of the glacier calves off at an equal rate so that the glacier remains more or less at the same location.

The famous breaking of the Perito Moreno Glacier occurs when the ice crosses the Canal de los Témpanos that connects the Brazo Rico to Lago Argentino and meets the opposite shore. Thus the Brazo Rico is cut off and its water level rises as it continues to receive rainwater and melting ice and snow from the mountains and glaciers. Eventually the pressure of water begins to push past the point of contact of the glacier with the land, creating a small tunnel. This tunnel increases in size until the ice above it becomes an ice bridge that eventually wears thin and breaks in a spectacular event of tons of crashing ice. The first known breaking occurred in 1917 – the only evidence being the sudden flooding of a 700-year-old forest.

Surprisingly, in the 1950s, when swelling of the lake was causing the flooding of the estancias, the local people tried to break the ice bridge by force. First they tried using salt, then carbon. Then they called in the air force to bomb it! They were all futile efforts; it will only break when it is ready, by the true force of nature.

In 1940, the first breaking actually recognised by geologists at the time of its event brought it to the attention of tourists. Since then the phenomenon has taken place every two to four years (with gaps from 1956 to 1970 and 1991 to 2004); scientists cannot predict with accuracy when the next break will occur. Surprisingly, in the 1950s, when this swelling of the lake was causing the flooding of the estancias, the local people tried to break the ice bridge by force. First they tried using salt, then carbon. Then they called in the air force to bomb it! They were all futile efforts; it will only break when it is ready, by the true force of nature.

The park was founded in 1937, and its 717,800km² area was designated a UNESCO World Heritage Site in 1981. Thirty percent of this great park is covered in glaciers – 365 individual glaciers in total. The 13 largest of those on the Atlantic watershed are the Perito Moreno, Marconi, Viedma, Moyano, Upsala, Agassiz, Bolado, Onelli, Peineta, Spegazzini, Mayo, Ameghino and Frías glaciers.