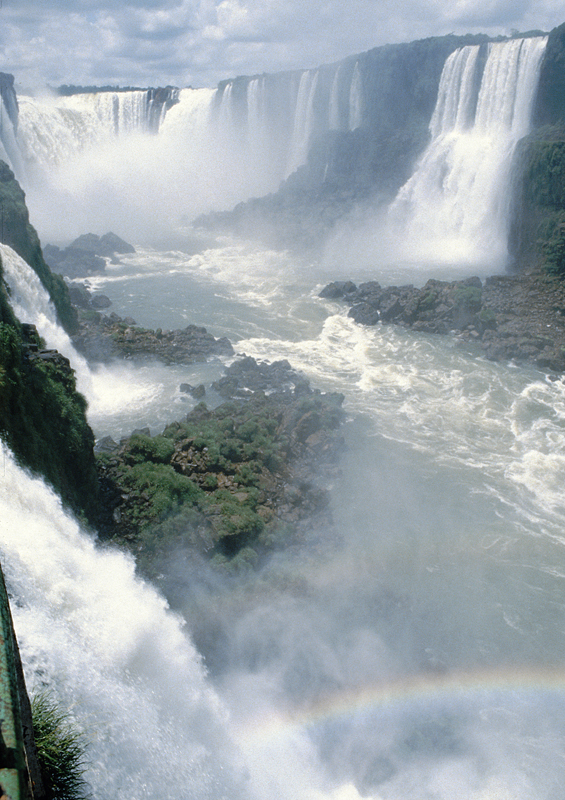 Alvar Nuñez Cabeza de Vaca, the second governor of Río de la Plata, presumed that he was the first to discover the falls on his voyage from Santa Catarina to Asunción in 1541, and named them the Santa María Falls. The Guaraní indigenous people, however, were here much earlier and had already named them Iguazú (‘Great Water’). (The ‘i’ is the Guaraní for ‘water’, and the same ‘i’ as in ‘Iberá’, though the Guaraní pronounce it more like a swallowed ‘urr’.) The Garganta del Diablo (Devil’s Throat) swallows 1,700m³ of water per second with an unquenchable thirst, and still more water from the enormous floodplain spills over hundreds of smaller cascades.

(Photo: Immerse yourself in this incredible natural wonder and take a walk along the boardwalks over the rivers to the falls © Reinhard Jahn, Wikipedia)

The 67,620ha surrounding the Iguazú Falls were given National Park status in 1934 and designated a UNESCO World Heritage Site in 1984. The natural wonder of the falls and the high biodiversity of the subtropical rainforest (2m of precipitation on average per year) make it one of the most valuable and beautiful parks in the country; yet that recognition came almost too late. The subtropical Paranáense rainforest that once covered a great area of Brazil, Paraguay and Argentina has been reduced to 6% of its original area.

The sheer power, size and spectacle of these vast waterfalls, by the point where Argentina, Brazil and Paraguay meet, has to be seen to be believed: it’s one of the world’s must-sees.

The forest around the falls is successional, or in the early stages of re-growth, having been cleared many years ago. Orange trees can be found close to the falls, where early foresters dropped pips from the fruit they brought for their lunch – oranges are not native to the Americas. Old-growth jungle is characterised by a full canopy of tall trees blocking the sun and thus leaving the understorey quite bare.

Of the 1,000-plus bird species in Argentina (South America has one of the highest diversities of birdlife on the planet), around 450 have been recorded in Iguazú, making it Argentina’s richest hotspot of biodiversity. The great dusky swift, the park’s emblematic species, can be seen flying over the falls and in the mists, roosting and nesting on the cliff faces beside and even behind the falls. Toucans are elusive, but can be seen at dawn and dusk. Bright green birds such as blue-winged parrotlets and green-headed tanagers are often overlooked hiding in the jungle foliage, but are stunning to see.

One of the more interesting behaviourally is the red-rumped cacique. More often heard before seen, their rowdy chatter will draw attention upwards to large colonies of hanging nests in a single tree. Iguazú in springtime is a wonderful spectacle with over 200 species of butterfly, enchanting clouds of mariposas converging en masse and filling the jungle with moving colour. Eighty mammal species, including caí monkeys (Cebus paella nigritus) and the elusive jaguar, are known to inhabit the jungle. Coatis (members of the racoon family) are an obvious presence, easily habituated to human presence by scrounging for food scraps.

Perhaps the most ominous forest creature is the mythical river snake or Boi. The Guaraní tell the legend of the giant snake that dwelt in the Río Iguazú, appeased by their ancestors with the sacrifice of a village maiden. One chief, Tarobá, loved the next intended victim, Naipi, so ran away with her into the forest to save her. Boi was so furious that it broke the riverbed with an angry twist of its back, causing the lovers to fall into its lair and thus creating the falls. Boi turned Tarobá into the trees that canopy the upper falls and Naipi’s hair became the waterfalls. Boi lives in Devil’s Throat, preventing the lovers from meeting; but when the sun shines at a sympathetic angle it creates a rainbow to link the couple, if only for a few minutes.