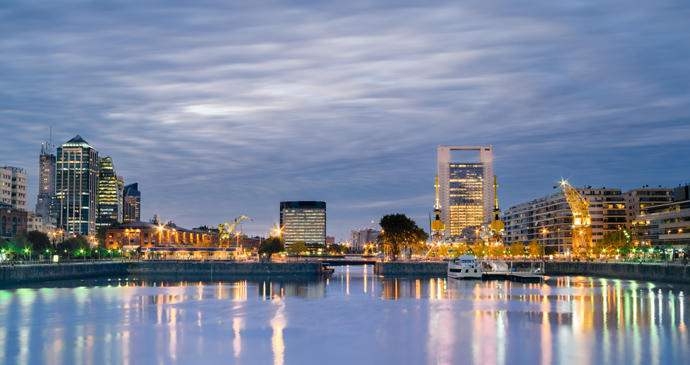 The city’s inhabitants came to be referred to as porteños or port residents, a great mix of Italian, Spanish, British, Jewish, Afro-Argentine, German, and Portuguese immigrants. It is a unique city within Argentina and the people even have a characteristic accent that differs from the rest of the country.

The city effortlessly blends South American colour, rhythm and spice with European elegance, style and sophistication and North American economic and commercial ambitions, all the while maintaining a culture, a language, folklore, music and dance that is purely Argentine, and distinctly porteño. And yes, tango really is everywhere, from the gaudy street-dancer kitsch of Caminito to the urgent city-music fusion pouring out of shops and restaurants.

The city is referred to as the Capital Federal, or sometimes the Ciudad Autónoma de Buenos Aires or Autonomous City of BA, or shortened to ‘BsAs’. It has a population of over three million; the metropolitan area of Gran Buenos Aires, also known as the Gran Aldea (great village), includes the Capital Federal and surrounding districts, or partidos, and reaches a population of 13 million. Around 1910, Buenos Aires became the first South American city to reach a population of one million; its inhabitants came to be referred to as porteños or port residents, a great mix of Italian, Spanish, British, Jewish, Afro-Argentine, German, and Portuguese immigrants. It is a unique city within Argentina and the people even have a characteristic accent that differs from the rest of the country.

Buenos Aires was actually founded twice, some say even three times. The first was in 1536, by Pedro de Mendoza, leading one of the first Spanish expeditions to Argentina. He arrived at a large estuary that had been previously claimed by Juan Díaz de Solís in 1516 on the first, and unfortunately fatal, expedition to Argentina, sailing down from Brazil in search of a southern passage to the Pacific. This second voyage followed the fall of the Inca Empire in 1532; the King of Spain, Carlos I, sent Mendoza’s group to counter Portuguese advances in the territory. The group was able to settle on the southwestern bank of the estuary, and the settlement was soon named Nuestra Señora Santa María del Buen Aire.

However, the native Americans who were long established in the area did not perceive their lands as available for settlement. Their warriors, who had already become skilled horsemen, launched repeated attacks upon the settlement and any exploration parties it attempted to send out. Shortage of food and supplies led Mendoza to abandon the settlement in 1537. It was not until 1580 that Buenos Aires was founded for the second time at the ‘River of Silver’ (Río de la Plata, or River Plate) by Juan de Garay. His intention was to establish the Río de la Plata as a gateway for trade.

It was during these early days of pioneering the pampas that the leather and beef industry was born, and so was born the famous gaucho or Argentine cowboy.

Rudimentary plans for a town took shape with streets laid out in a grid. In the centre was established the Plaza Mayor, today the Plaza de Mayo, and a fort was erected on the site where the Executive Office Building now stands. Buenos Aires was subordinate to Asunción, which was in turn subordinate to the Viceroyalty of Lima, which was subordinate then to Madrid, the Spanish capital; it would take a couple of centuries for Buenos Aires to grow and match Lima’s level of power and status. Meanwhile, it was cut off from communication with Spain owing to colonial and mercantile bureaucracy. The large trading fleets from Spain would stop in Cuba and at Portobello on the Isthmus of Panamá, send their goods by mule across the isthmus to the Pacific and load them onto fresh ships for Callao, near Lima. This route was relatively safe from attack but very lengthy and costly and Buenos Aires was quite neglected.

Buenos Aires was only permitted to receive registered ships, sailing only every year or so, and up to five years could pass without a registered ship arriving from Spain. The porteños in those days suffered greatly under this system; culturally they could not adapt to the Querandí’s hunting-and-gathering lifestyle, and it was inevitable that bootlegging would become a means of survival. Against Spanish authorisation, the porteños began trading with the British and Portuguese vessels that passed; and what they had to trade was leather. Cattle and horses abandoned by the Mendoza expedition had by this time grown into semi-wild herds that populated the pampas. The leather was too crude to trade with Spain, but it was acceptable for contraband trade. It was during these early days of pioneering the pampas that the leather and beef industry was born, and so was born the famous gaucho or Argentine cowboy. 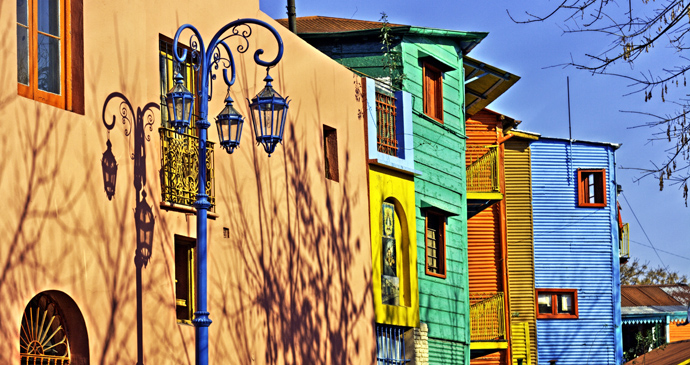 The colourful street museum and alley of Caminito in the La Boca neighbourhood © Luis Argerich, Wikipedia

The increase in commercial activity, smuggling and the slave trade caused Buenos Aires to expand. By 1776, its population exceeded 25,000; Spain had come to recognise the importance of Buenos Aires and in that year made it the capital of the newly created Viceroyalty of the River Plate, which included the wealthy silver region of Potosí (in present-day Bolivia). In 1778, the Atlantic ports were allowed to trade freely, giving a big boost to the city’s growth. In 1800, the British Empire began implementing its colonial expansion policies and the Río de la Plata was in its sights as a potential British base for trade.

The first attack on Buenos Aires in 1806, led by Commander Beresford, was opposed by Spanish troops led by Santiago de Liniers from Montevideo (taking command in the absence of Viceroy Rafael de Sobremonte, who had fled at the onset of the attack), together with an urban militia of Spanish civilians, Creole patricios and peasant gauchos. The battle was short and the British force surrendered and was interned in Luján. A second ill-advised attack in July 1807 by 10,000 men under Major-General John Whitelock was repelled by the heroic defence of the urban militia, aided by women and children using such tactics as pouring boiling oil and water from windows and rooftops and firing cannons from balconies (in particular the balcony of Defensa 372, now the Museo Nacional del Grabado).

Whitelock’s headstrong frontal attack on the fortified city resulted in the immediate loss of almost a third of his men. He accepted a truce offered by Liniers and was evacuated to Montevideo, from where he returned to Britain to face court martial. These battles are known as La Reconquista and La Defensa and were remarkable because the residents themselves, the porteños, organised their own defence without the aid of the colonial power and with decisions being made without reference to Madrid or intervention from the viceroy.

Meanwhile in Europe, Napoleon had crossed Spain to invade Portugal (allied with Britain) with the assistance of Charles IV; Charles was forced to abdicate and was replaced on the throne by Ferdinand. Napoleon forcibly re-established Charles as king, in order for Charles to then yield it to Napoleon, who then put his brother Joseph on the Spanish throne. This created anti-French sentiment in Buenos Aires leading to the execution of Liniers solely on the basis of his French name. On 25 May 1810, the citizens of Buenos Aires revolted and disposed of Viceroy Sobremonte for he was seen as a coward and not capable of protecting the River Plate.

The May Revolution of 1810 replaced him with an autonomous governing body. Buenos Aires itself had reached a population of over 300,000, and recognisable neighbourhoods, barrios, had been established. Some consider the city to have had a third founding with mass immigration in the late 19th century. A century later, Buenos Aires’s population had grown eightfold and the city was modern and cosmopolitan. The first subway line (the first in Latin America) opened in 1911, and the city’s first skyscraper, the Barolo Building, appeared in 1920. By 1950, Buenos Aires was one of the largest cities in the world.