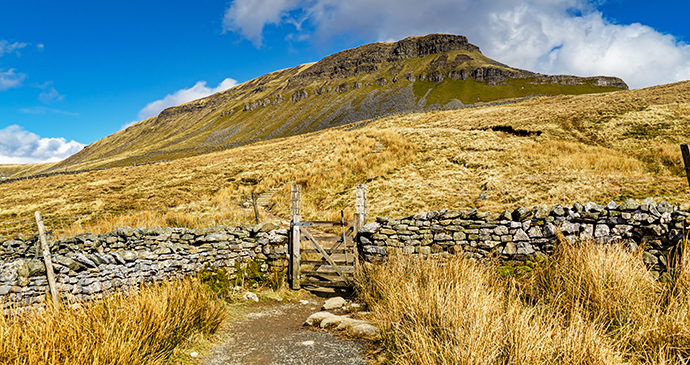 This is not as uniform a region as the eastern Dales, but an area of borders, watersheds and transformations.

Some of the highest land in Yorkshire lies on the western side of the Yorkshire Dales (which actually stray into Cumbria), where the rivers Dee, Skirfare, Greta and Ribble bubble into life. It is an area dominated by three great, brooding hills, Whernside, Ingleborough and Pen-y-ghent, that collectively give this area its unofficial name. Ironically, none of these flat-topped heights could remotely be called a peak but a much-tramped long-distance challenge walk linking the three coined the name and it has stuck.

The legendary walking-book author Alfred Wainwright, in his 1970 guide Walks in Limestone Country, said of the area: ‘This is a region unique, without a counterpart, but its charms are shyly hidden. Those who seek and find them are often enslaved, yet few visitors come looking.’ He would probably be astonished and appalled at the numbers of visitors that do come now, but his observation that a little bit of searching can reveal enchanting hidden places still holds true. Some of my first real exploring as a schoolboy was done here, and the hidden places that I discovered then have left indelible marks, and remain very special to me.

This is not as uniform a region as the eastern Dales, but an area of borders, watersheds and transformations. Even before the 1974 county boundary changes bit off a huge chunk of the North Riding and called it Cumbria, Lancashire was never far away, and the local Yorkshire accent has a distinct ‘lanky’ twang to it. Most of the rivers flow west, to join the Lune, and eventually Morecambe Bay; and where the limestone runs out, the hills develop a distinctly Lake District feel to them.