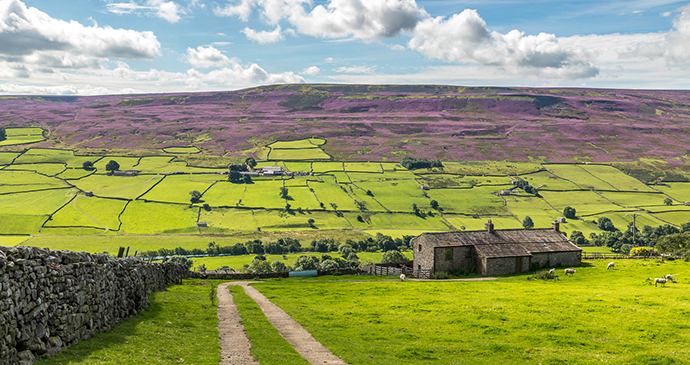 The views over the heather moors of Swaledale are spectacular © Andrew Locking/www.andrewswalks.co.uk

The dale takes its name from the River Swale which bubbles into life high on the flanks of High Pike Hill.

The Yorkshire Dales vary in character, with each valley possessing its own unique quirks, but Swaledale always seems to me more different than the others. It is a dale apart, with much more of a northern feel to it: place names are almost all unadulterated Norse, woods are few and far between, and people almost as thin on the ground. Swaledale is the least populated of the Dales, with no towns at all above Richmond, and no main roads. It is quiet and wild and for those reasons alone is many people’s favourite.

For the past thousand years Swaledale’s economy and landscape has been shaped by two things, sheep and lead. The lack of trees is down to historical forest clearance for grazing but doesn’t come close to the devastation wrought by the huge lead-mining industry of the 18th and 19th centuries. Most of the Yorkshire Dales still bear the scars of this former activity, but Swaledale more than most.

The dale takes its name from the River Swale which bubbles into life high on the flanks of High Pike Hill, but only earns its name down in the valley, just above the village of Keld. It careers downhill, leaping over waterfalls at every opportunity, past the villages of Muker and Gunnerside and catching its breath a little at Reeth. This is the largest village and unofficial capital of Upper Swaledale and Arkengarthdale, sitting as it does at the point where the two valleys meet. During the next nine miles, the river gets its second wind, speeding up and racing on through the rapids at Marrick Priory to arrive in style at Town Falls in Richmond below the walls of the castle.