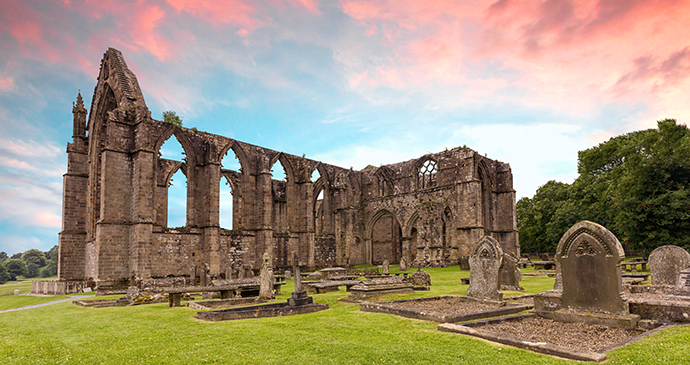 The riverside site of Bolton Abbey ranks as one of the most awe-inspiring positions for an abbey anywhere © Anneka, Shutterstock

Craven, the wild acres of high land to the west of Wharfedale, is a geological wonderland of all things limestone: pot-holes, ‘clint and grike’ pavements, disappearing rivers, collapsed caverns and amphitheatres.

This southernmost part of the Yorkshire Dales only just makes it into North Yorkshire, and its closeness to the big cities of Leeds and Bradford makes it probably the most visited region in the national park. Three rivers drain south here: the Ribble, which then escapes westwards into Lancashire, the Aire, and the longest of the Dales watercourses, the Wharfe.

Wharfedale’s corridor-like nature sets it apart from the other Yorkshire Dales, that and the river that created it. If forced into a choice, I would have to plump for the Wharfe as my favourite Yorkshire river. Its deep, clear pools, strids, riffles and cascades provide unsurpassed variety of watery landscape, and arguably the richest wildlife in all of the national park. Craven, the wild acres of high land to the west of Wharfedale, is a geological wonderland of all things limestone: pot-holes, ‘clint and grike’ pavements, disappearing rivers, collapsed caverns and amphitheatres – it’s all here, and at its most spectacular around Malham.

While for the most part the individual dales of the Yorkshire Dales fit into easily identifiable chunks of scenery, the Craven district is a strangely nebulous idea with no neatly defined edges. I take it as stretching from the River Ribble in the west, handy as ‘Ribble’ means boundary in Anglo-Saxon, to the catchment of the Wharfe in the east. The small town of Settle sits along the east bank of the Ribble with the frivolously named Giggleswick on the opposite side. Behind Settle the land rises steeply at the start of well over 100 square miles of wild upland dominated by carboniferous limestone.

Further upstream, Wharfedale heads between the high fells beyond the twin villages of Kilnsey and Conistone, splitting into the two arms of Littondale and Langstrothdale which then wrap around the top of Craven in a cosy embrace. Usually, as you head up a hillcountry valley, settlements become sparser and smaller; Wharfedale does not deviate from this norm, and beyond Grassington there is nothing even remotely resembling a town.